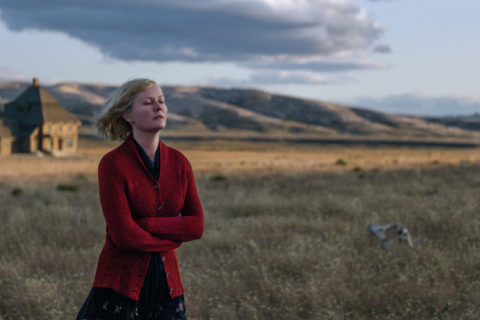 Kirsten Dunst is one of the most captivating performers of our generation (I mean, she went from The Virgin Suicides to Bring It On in the span of a year!), but even as the child actor turned teen screen queen was laureled among her peers, she could never nab the industry accolades she deserved. Well, today, the Academy actually did something right.

After she moves into the Burbank family home with her son, Phil intimidates and incessantly taunts Rose — sending her spiraling. The eerie film follows her devastating descent into madness. Rose feels powerless and trapped by Phil, and ultimately turns to alcohol to numb her anxiety. The Power of the Dog finds a demurely costumed Dunst among mostly male characters, and is a gripping commentary on toxic masculinity.

The film earned 12 nods, leading the pack of nominees that included Andrew Garfield for Tick, Tick…Boom! and Kristen Stewart for Spencer. And, as per usual, there were snubs (no, Lady Gaga’s didn’t get her House of Gucci Oscar nomination).

Though The Power of the Dog captured the attention of the Academy, it’s not Dunst’s only Oscar-worthy performance.

Since the 1990s, Kirsten Dunst has cemented her status as Hollywood’s girl next door (she was literally the girl next door when she played Mary Jane in 2002’s Spider-Man), from her childhood roles in Interview with the Vampire (1994) and Jumanji (1995) to beloved teen romcom Bring It On (2000) and dramas like Sofia Coppola’s Marie Antoinette (2006) and The Virgin Suicides (2001).

In The Virgin Suicides, she portrayed complex suburban teen Lux Lisbon, for which Dunst earned a Teen Choice Awards nomination. The film — a darkly romanticized take on adolescence — was the start of a long-term working relationship between Kirsten Dunst and Coppola, leading Dunst to star in the director’s other titles, including Marie Antoinette, a polarizing, high-fashion historical drama about the indulgent Queen of France. Neither film was successful upon release, but over the years both have attained cult status.

Kirsten Dunst on the set of The Virgin Suicides pic.twitter.com/ahaRvKw2X9

There’s no doubt Dunst has been consistently killing it (she’s even earned nods from The Golden Globes and the Critics’ Choice Television Awards for roles in Fargo and On Becoming a God in Central Florida), so why hasn’t she been in the Oscar conversation until now?

In 2019, the actor opened up in a SiriusXM radio interview about the lack of recognition she’s received over the course of her career.

“I just feel like, ‘What did I do?’” she said. “I am so chill. Maybe I don’t play the game enough. I mean I do everything I’m supposed to. It’s not like I’m rude or not doing publicity or anything. I just feel like…I know that all you have is your work at the end of the day. And that’s all people really care about. I’m intelligent enough to know that and have perspective, but sometimes you’re like, ‘It would be nice to be recognized by your peers.’”

Perhaps it’s because Dunst has starred in film genres that historically haven’t been taken as seriously, like romantic comedies and dramas that centre female stories. Ageism is also pervasive in Hollywood, and female actors often aren’t recognized in the industry as they get older. This is why it’s so important that Dunst is receiving her well-deserved praise later in her career.

On top of it all, it feels right that Dunst is receiving an Oscar nod for her role in a film that so poignantly touches on the impact of pervasive toxic masculinity. It’s poetic justice, and we love to see it.

The Oscars will take place (in person!) on March 27 at the Dolby Theatre in Hollywood. In Canada, the ceremony can be streamed on CTV at 8 p.m. EST.