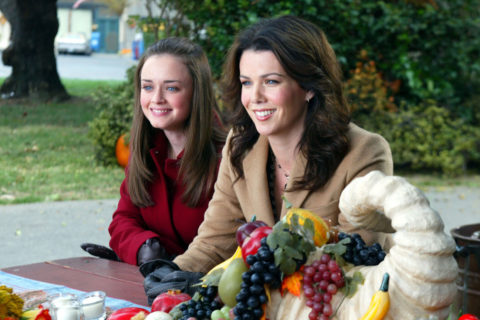 Why Gilmore Girls Is My Fall-Fashion Safe Space

If pumpkin spice lattes were a show, Gilmore Girls would be it.

Every year at the start of autumn, as the air gets crisp and the leaves begin to change, Gilmore Girls becomes my whole personality. Let me explain.

The iconic series, which premiered in 2000, follows the close-knit relationship between mother-daughter duo Lorelai and Rory Gilmore. For seven seasons, the lovable, quirky pair — who are only 16 years apart — fumble through new relationships, career/school endeavours and hard-to-swallow personal lessons. Living in the fictional New England town of Stars Hallow, the main characters’ witty personalities and impeccable 2000s fall-weather fashion keep viewers coming back — especially as the temperature drops.

The yearly Gilmore Girls rewatch is a widely shared experience — a viral viewing pilgrimage, if you will — because of its inherent coziness. Soothing guitar riffs and “la la la” vocals bookend scenes. Comfort food and movie marathons are a staple of each episode. And over time, the show has become synonymous with quintessential autumnal pastimes like drinking coffee, reading a good book and wearing layered outfits. (For all intents and purposes, I’m referring to the original Gilmore Girls, not 2016’s A Year In The Life revival, which didn’t offer the sentimentality of its predecessor.)

As someone who never considered myself to be particularly fashionable growing up, Gilmore Girls offered an accessible entry point to dressing my best. That’s because the aesthetics of the show were, first and foremost, about being comfy (which I can definitely get behind). As a single-income household, Lorelai and Rory’s casual ensembles emitted a stylish thrift store effortlessness. Their early aughts outfits were comprised of cozy knits, knee-high boots and staple accessories like thin scarves, chokers and paisley bandanas. Best of all? Their DIY looks — often completed with a coffee cup or book in hand — felt lived in, and thus, achievable.

Naturally, their styles evolved as they matured. After entering university, Rory opted for jeans and zip-up sweaters instead of her high-school uniform. And in later seasons, Lorelai swapped her psychedelic pattern T-shirts for wrap dresses. But through their growing pains and new phases of life, they always managed to have fun together. And notably, their outfits remained reliably laid-back, with them often mixing or re-wearing pieces. Unsurprisingly, all these years later, the show has become its own trendy aesthetic.

On Pinterest and TikTok, “Gilmorecore” mood boards are the epitome of early aughts autumnal style. Amid today’s 2000s fashion renaissance, Gilmore Girls–inspired outfits are more apropos than ever. Think low-rise bootcut jeans or midi skirts paired with noughties-era tops like sleeveless turtle necks, silk button-ups, empire waist blouses and any kind of knitwear. Mixing colours and patterns — like stripes, tie-dye and plaid —  is also perfectly welcome. And let’s not forget the jackets. Lorelai, specifically, had an impressive collection of leather trenches, penny lane coats and an endless variety of jean or corduroy outerwear pieces.

Along with its binge-worthy plot lines, the clothes in Gilmore Girls are both timeless and nostalgic. Through my years of watching and re-watching, the show has become a sartorial sanctuary that reminds me to find joy in the small things — whether it’s by tasting a good cup of coffee or burying myself in a gigantic sweater.

Of course, like many products of the early 2000s, Gilmore Girls had its problems. In recent years, it’s been criticized for lacking diversity and promoting classist talking points. (The 2016 revival arguably worsened this tone-deaf reputation.) But it’s the show’s cushy qualities that keep me (and many others) coming back. After all, Gilmore Girls, at its core, is a story about growing up. Lorelai and Rory aren’t perfect, sure, but they’re learning how to navigate life together.

For me, fall somehow manages to amplify the daunting aspects of adulting. When summer ends and a new school year begins, there’s a sense of responsibility in the air that forces me to re-evaluate where I’m at in my life. But just as the seasons have to change, newness is a necessary part of growth. And despite what’s going on in my life, channelling Gilmore Girls fashion always seems to make me feel a little bit more at home.

Photography by Mitchell Haddad/CBS Photo Archive via Getty Images
Get the best of FASHION in your inbox Thanks for signing up!
The latest fashion, beauty and celeb news delivered right to your email #FASHIONforall Now, check your inbox to complete your subscription
We won’t ever use your email address for anything else
Want even more FASHION? Follow us on social media.