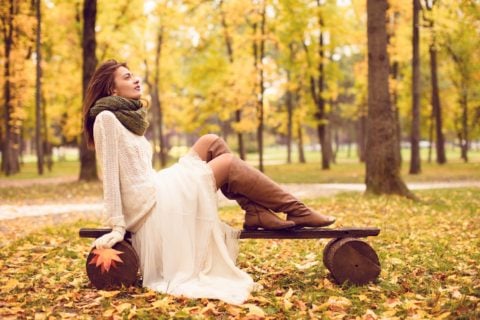 The Viral Christian Girl Autumn Meme is Back, and So is “Basic” Fashion

It's the age of cheugy.

Most social media users are well-versed in Hot Girl Summer. Coined by rapper Megan Thee Stallion in May 2019, the term is synonymous with someone who minds their business, does what makes them happy, and doesn’t care what others think. The feel-good phrase was widely popular in summer 2019, but as the season came to a close, it led to the birth of a new viral meme: Christian Girl Autumn.

The meme was started by user @lasagnabby, named Gio, who wrote in a since-deleted tweet, “​​Hot Girl Summer is coming to an end, get ready for Christian Girl Autumn 🍂😍.” Attached to the tweet was a picture of two white women with very similar autumnal-style outfits — think skinny jeans, oversized cardigans/sweaters, infinity scarves — and long, perfectly curled hair. Gio later told Buzzfeed they found the photo after Googling “cute church outfits” and “all scarf outfits.”

The tweet went viral, and it was met with responses that mocked the photo. Users called the women “basic,” with some even saying the friends appeared like the types of people who would be culturally ignorant, homophobic, and mean to service workers.

Soon, the meme found its way back to the feeds of the two women, Southern bloggers and influencers Emily Gemma (@emilyanngemma) and Caitlin Covington (@cmcoving). They responded, telling Buzzfeed that, while they are Christian, they’re not intolerant or judgemental people. Then, they played along with joke. Covington took to Twitter to give better options of photos to use in the meme.

If all of Twitter is gonna make fun of my fall photos, at least pick some good ones! 🤣 Super proud of these. For the record, I do like pumpkin spice lattes. Cheers! ☕️ pic.twitter.com/QzflqTwqAE

By welcoming the joke, Covington and Gemma were embraced across social media. Covington confirmed that she supports LGBTQ+ communities, and has since reshared and donated to a GoFundMe made by the creator of the meme, Gio, who is seeking gender-affirming health care. Because the meme was wholeheartedly embraced by its subjects, it has resurfaced every year, and is even being used unironically by those who simply want to enjoy the coziness of the fall season.

The reason for the season 🍃 pic.twitter.com/nDHoxOos3k

The Christian Girl Autumn aesthetic is widely recognizable. It usually consists of wide brim hats, oversized wool sweaters, comfy scarves and over-the-knee suede or leather boots. Though at first considered basic, the style has since been embraced by the internet for capturing the joyous comfort of fall-weather dressing.

And even more, being “basic” is increasingly becoming cool, with the growing resurgence of items that were once considered “cheugy”. For instance, 2010s wardrobe staples like Crocs and Ugg boots have now re-entered mainstream fashion consciousness. Uggs, once central to the archetype of being basic, have been adopted and embraced by the highly coveted brand Telfar, who recently launched a new collaboration with the footwear brand that elevates the ethos of Ugg coziness. Crocs has also seen a revitalization of its brand image, through collaborations with high-fashion houses like Balenciaga and Christopher Kane. Both Crocs and Ugg boots are now being embraced in the closets of many, as opposed to being shunned.

At its core, shaming something for “being basic” is rooted in the idea that it’s inherently uncool for a lot of women to like something. By pushing back on the binary of what is “good” or “bad” in fashion, Christian Girl Autumn, much like Hot Girl Summer, is about doing what makes you happy. As we move into the era of embracing things that were once considered “uncool,” nothing seems more fitting.