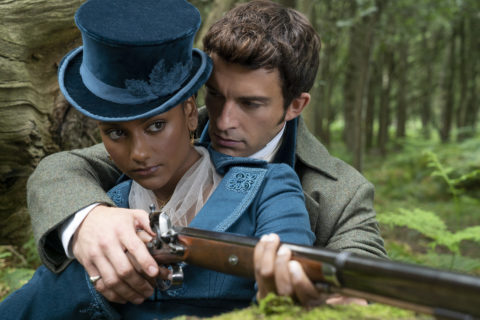 Simone Ashley is Owning Her Voice in Bridgerton Season Two

It’s no secret that Bridgerton’s captivating storylines are driven by strong women. Sure, the period drama gives us plenty of regency glamour and steamy romance scenes, but its beauty is ultimately rooted in female agency, sisterhood and friendships. These themes are front and center in the upcoming second season, thanks to newcomer Kate Sharma, played by Simone Ashley.

When Lady Whisteldown’s gossip-filled society returns to Netflix on March 25, it will follow the story of Anthony, the eldest Bridgerton sibling and Viscount, as he tries to find a wife that meets his impossible standards. Kate, who has just moved to London from India with her younger sister Edwina (Charithra Chandran) and mother Mary (Shelley Conn), clashes with the Viscount instantly, despite their palpable chemistry.

Anthony has met his match in Kate: she is stubborn, sharp and not afraid to use her voice. And as it turns out, embodying this powerful personality on-screen has had an impact on Simone Ashley in real life.

When speaking at a Bridgerton press conference on March 21, the 26-year-old British actor was asked what she’s learned about herself while playing Kate. “I’m going to keep it simple. I think I learned to just own it a little bit more and to not be afraid of owning my voice,” she explained, then adding, “That was scary in itself, saying that, but I’m owning it.”

In the film and TV industry, owning your voice comes with another set of challenges for actors of South Asian backgrounds like Ashley, who haven’t traditionally seen themselves represented on screen. But the star’s magnetic presence and real-life style has fans already hailing her as Netflix’s newest It Girl, and the upcoming season’s most charming character.

But Ashley is not new to the business of groundbreaking TV. She plays the intimidating yet secretly kind hearted popular girl Olivia Hanan in Netflix sensation Sex Education, a comedy series that offers fresh perspectives on puberty, sex and relationships.

Bridgerton, too, subverts expectations in more ways than one. Its scandalous plots and salacious writing push the boundaries of a traditional period drama, which has historically lacked representation.

“Finding South Asian women with darker skin and making sure that they were represented on screen authentically and truthfully feels like something that we haven’t seen nearly enough of,” said executive producer Shonda Rhimes in a recent press release. “I felt like it was time for us to make sure that we were seeing [that] as much as possible.” This season, two of the show’s lead actors, Ashley and Chandran, offer that representation.

The Sharmas come to Regency London as outsiders trying to fit in. As we get to know them, we see nods to South Asian culture through practices like the Haldi Ceremony, a traditional Indian pre-wedding ritual.

“I remember filming the Haldi scene so well… I never really imagined we’d ever be on a set one day performing a scene like that,” Ashley reflected. “There was so much of our own personal experience that we brought to those moments as well.”

Filled with fresh faces and new stories, Bridgerton season two promises more intrigue, gossip and scandal. But while its love conquest plotlines are filled with drama, it simultaneously highlights the enduring strength of sisterhood.

Kate’s role as the protective older sister and her connection to her culture stick out as heartwarming pillars of the upcoming season. As we prepare to watch Simone Ashley discover her voice through Kate, we’re rooting for her already.