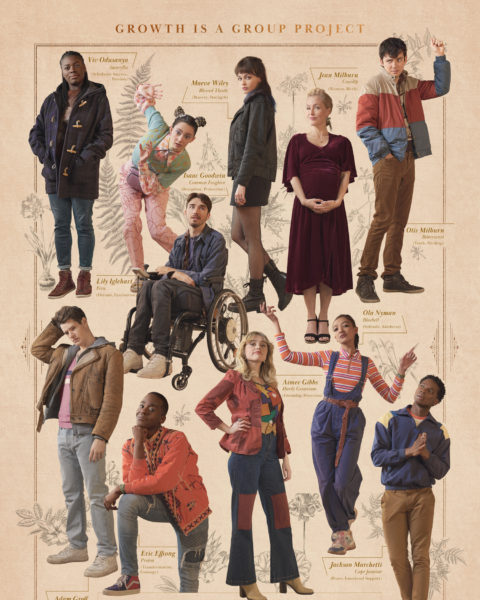 Why Sex Education Is The Internet’s Favourite Show

The show is an ode to therapy and open conversations about sex.

I shed actual tears when watching the most recent season of Sex Education. As someone who received a not-so-comprehensive sex ed in school, it feels life changing to see mainstream media embrace open dialogue with courage, honesty and humour. And I’m not alone — thanks to the overwhelmingly positive reaction to the British hit show’s newly released season 3, it has already been renewed for a fourth season. Sex Education has an unapologetic devotion to pushing back on the embarrassment that’s often wrapped up in sex, and it has grown to be internet famous because of it.

The series, created by Laurie Dunn, follows the students at fictional Moordale Secondary School as they navigate their sexualities. The show starts with Otis Milburn (played by Asa Butterfield) opening a “sex clinic” at school with his friend Maeve Wiley (Emma Mackey). Otis’s mother, Jean Milburn (Gillian Anderson), is a sex therapist, and it quickly becomes apparent that Otis has inherited his mom’s talent. With their clinic, Otis and Maeve help their teenage peers navigate the inherently enigmatic concept that is sex. But season 3 presents unique challenges for the students when a new headteacher, Hope Haddon (Jemima Kirke), seeks to build a more controlled and strict school environment, thus creating a culture of shame around sexuality.

At its core, Sex Education show is an ode to therapy. Gone are the days of stigmatized mental health accommodations and notions that going to therapy somehow makes you weak — talking through your problems is in! With new characters and complex storylines, the show addresses parts of sex that are often seen as taboo. It’s safe to say we all wish we had this kind of transparency around sex growing up.

There’s so much to love about Sex Education — but here are some of our favourite unexpected things about the show. (Spoilers ahead!)

Sex Education characters have unique wardrobes that don’t follow any current trends but speak to their individual storylines. Eric Effiong (Ncuti Gatwa) is a prime example of this. Eric is gay and uses his personal style and knack for fashion as a way to express himself. In an interview with Off Colour, costume designer Rosa Dias says, “With Eric, I just wanted to create a person who had such confidence in himself.” He wears bright colours, mixes loud patterns, sports glittery makeup, and has a contagious aura of self-love. But when Eric goes through a traumatic experience in season 1, his style dramatically changes. He begins wearing muted tones and basics like T-shirts and zip-up sweaters in lieu of his signature colourful statement pieces. When he regains his confidence, Eric channels his Ghanaian-Nigerian background and queer identity, showing up to prom in a kente suit from Ghana and gele (head tie) from Nigeria.

When headteacher Hope implements school uniforms in season 3, individuality is harder to express and this impacts queer students differently. Because uniforms are historically gendered — with distinct sets made for boys and girls — the new rules consequently force students into gender identity boxes. A newly introduced character, Cal Bowman (played by American artist Dua Saleh) runs into problems because of this. Cal is non-binary, and Hope (who perceives them as a girl) tells them they are in the wrong uniform when they show up wearing the loosely fitted boys’ attire. Hope then tells them they must wear a smaller, more fitted size, and Cal refuses because as a gender-nonconforming person, they don’t wear clothes that hug their body. This stance is not taken seriously by Hope, who labels Cal as a problem student and continues to disregard their identity. Cal’s uniform choice remains a topic of contention throughout the season — representing a small but meaningful form of resistance.

The show’s most constant on-screen relationship is that of best friends Eric and Otis, who share a platonic male intimacy that is scarcely shown on-screen. They hug, cuddle, and willingly open up to each other — it’s a refreshing display of platonic love between two male characters.

it kinda makes me emotional to think about that fact that no matter what happens in sex ed, no matter who eric and otis date or end up with, they will always choose each other above all else https://t.co/yRhlvOWczg

The series also highlights the all-too-common reality of repressed emotions in men. Season 3 gives two of the shows’ former antagonists, Adam Groffe (Connor Swindell) and his father Micheal (Alistair Petrie), a complex backstory. Both characters were at times bullies on the show, but instead of painting them as inherently bad, Sex Education shows how they are both carrying the trauma of toxic masculinity. As a child, Micheal’s father instilled in him the dangerous notion that “boys don’t cry,” leading him to continue this cycle of stifled emotions with his son. Viewers are shown how this messaging leads men and boys to be unhappy and emotionally stunted later in life. Even still, the series leaves room for growth — displaying how both characters can end the cycle by learning to express themselves.

The realness of it all

Sex Education is about dismantling shame. There are many queer characters who are all different from each other and have distinct styles, flaws and preferences. Because queerness is so normalized, the show avoids tokenizing these characters. Fetishes, role-play and masturbation are all included as normal parts of sex, instead of othered concepts. The show also brings to light the less glamorous parts of sexuality, like insecurities about penis size or vulva shape, and learning how to bind your chest as a non-binary person. Disabled sex is also represented in the show, with a scene between Maeve and her neighbour Isaac Goodwin (George Robinson), who uses a wheelchair. They talk through their intimate moment, using verbal check-ins as a way of ensuring the other person is enjoying themselves. A+!

While highlighting consent and healthy self-discovery, the show displays the dangers of inadequate sex education. With Hope’s reign at Moordale, students are subjected to watching outdated, heteronormative pre-recorded tapes as their means of sex ed. Like a lot of traditional sex education, the tapes use fear-mongering as a way to preach abstinence. Armed with harmful misinformation, students begin to freak out, with one gay student wrongly believing he has contracted HIV. The show addresses this with a scene from a nurse explaining that despite ongoing HIV stigma, HIV/AIDS is preventable and treatable.

The moral of the story? Communication works and open dialogues around sex are necessary! Sex Education is a gift to us all.