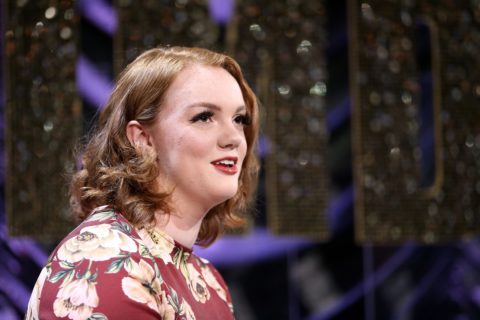 Celebrities Talk About Coming Out: The Stars Who Have Spoken Candidly on Their Sexuality

As much as the LGBTQ community is growing, there is still plenty of work to be done for its members, especially when it comes to support and acceptance. It is for this reason that coming out can be so difficult for many, especially those in the public eye.

However, there are a fair share of celebrities who have been brave enough to be open up about their sexuality and to assert their true identities to the public , whether it be via a magazine cover story, a televised interview or on social media. By coming out, these celebrities are helping to raise more awareness surrounding LGBTQ individuals, as well as promoting more acceptance and tolerance toward the community.

Here, we look back at some of the most memorable and inspiring celebrities to come out of the closet.

In April 2017, Stranger Things star Shannon Purser took to Twitter to open up about her anxiety surrounding her sexuality. The 19-year-old actress, who plays Barb on the hit Netflix show, admitted she was scared about discovering who she is.

She continued, “Either way, I know what it’s like to have anxiety about it. Especially trying to come to terms with it and my faith. It can be really scary. But it’s gonna be ok. You’re going to be ok. No, you’re going to be great.”

Later in the month, she officially came out as bisexual in a candid post via the social media platform.

“I’ve only just recently come out as bisexual to my family and friends,” she wrote. “It’s something I am still processing and trying to understand and I don’t like talking about it too much.”

The post came as a response to the backlash Purser received after posting a “thoughtless” (now-deleted) tweet about Riverdale fans who “ship” the show’s main characters, Betty and Veronica.

“I have never ever wanted to alienate anyone,” she continued. “It wasn’t a wise or kind thing to say and I’m disappointed in myself, especially as a Christian who has always been taught to speak love to others. Thank you to all the people who kindly reached out to me and educated me about the reality [of] your feelings about queerbaiting and I apologize to those who were hurt.”

In March 2017, Amber Heard spoke candidly on coming out at The Economist‘s annual Pride & Prejudice Summit in New York, saying it wasn’t easy for her, especially for an up-and-coming actress. Back in 2010, the media focused heavily on the actress when she boldly stated she wasn’t into labels on the red carpet at an event hosted by the Gay & Lesbian Alliance Against Defamation (GLAAD), where she took her then-girlfriend, artist and photographer, Tasya van Dee, as her date.

“I was always out. I was an activist. I went to protests. I refused to not bring my partner at the time, but no one ever asked me about it,” Heard said during the interview with Tom Standage. “And an outlet specifically asked me who I was there with that night and who that person was to me and I just answered honestly, the way I always answered had there not been a tape recorder on me.”

According to People, Heard was warned by Hollywood officials that announcing her sexuality would be detrimental to her career.

“Then I saw I was attached to a label … I never have myself defined by the person I’m with,” she said. “I never saw myself defined as one particular thing or not. So, I watched as I quickly became not actress Amber Heard, but out lesbian Amber Heard.”

The actress was not shy to admit she does recall that her past comments did impact her life as an actress.

“It did impact my career, it was difficult. It was not easy. I was the only one working in this way, so it was definitely difficult because no one had done it,” she said. “I did that even though everyone told me it would end my career, without a doubt.”

But like any pro in the Hollywood industry, even though a few directors questioned her ability to play a straight woman in upcoming lead roles, the actress slayed with one simple answer.

Since she hit superstardom with the Twilight franchise, Kristen Stewart’s love life has been major tabloid fodder. It all started with her “life imitating art” romance with co-star Robert Pattinson and was further intensified after she got caught cheating on him with married Snow White and the Huntsman director Rupert Sanders. (Still a very sensitive topic for Twihards around the world.) Since that scandal in 2012, Stewart has been seen with and rumoured to be dating multiple women in the industry. But despite the public interest, the actress has always kept extremely private when it comes to her romantic dealings—that is until now.

On her recent SNL appearance, Stewart uncharacteristically mentioned her sexuality, calling herself “so gay”—with humour, of course. But this was big for a woman who never wanted to draw attention to her private life. So why the shift? In a new interview with The Sunday Times, she revealed that her new-found comfort with coming out and going public about her private life is so she can inspire others. “I suddenly realized [my private life] affects a greater number of people than just me,” she said in the article. “It was an opportunity to surrender a bit of what was mine, to make even one other person feel good about themselves.” She said if it wasn’t for wanting to bring attention and awareness to the LGBT community, she probably wouldn’t be so eager to share, “If it didn’t seem like a relevant topic, like something that needed help, I would have kept my life private for ever.”

In an interview with GQ, the musician said that coming out in a post on Tumblr in 2012 was both terrifying and relieving, saying, “The night I posted it, I cried like a f**king baby. It was like all the frequency just clicked to a change in my head. All the receptors were now receiving a different signal, and I was happy. I hadn’t been happy in so long…There’s just some magic in truth and honesty and openness.”

The Canadian actress came out in a bold and brave way—announcing it during a speech at the Time to THRIVE concert. She explained to the crowd, “I’m here today because I am gay. And because maybe I can make a difference. To help others have an easier and more hopeful time. Regardless, for me, I feel a personal obligation and a social responsibility.”

The outspoken star, who is a huge advocate for the LGBT community, revealed her pansexual identity in an interview with Variety, explaining, “I always hated the word ‘bisexual,’ because that’s even putting me in a box. I don’t ever think about someone being a boy or someone being a girl.” She also admitted that though it took her parents some time, they eventually accepted her orientation. “My first relationship in my life was with a chick. I grew up in a very religious Southern family. The universe has always given me the power to know I’ll be OK. Even at that time, when my parents didn’t understand, I just felt that one day they are going to understand.”

In an effort to bring attention to the inequalities that still exist for the LGBT community in Russia, Miller declined an invitation to the 2013 International Film Festival in Russia. In a letter to the fest, he said, “As someone who has enjoyed visiting Russia in the past and can also claim a degree of Russian ancestry, it would make me happy to say yes. However, as a gay man, I must decline.”

“What I can say absolutely is that I am in love, and that person happens to be Holland Taylor.” Paulson finally went public about her romance with the Two and a Half Men star to The New York Times last year, calling their love “the most wonderful and extraordinary thing.” She added, “If my life choices had to be predicated based on what was expected of me from a community on either side, that’s going to make me feel really straitjacketed, and I don’t want to feel that.”

Last month, the gay actress told Sunday TODAY with Willie Geist about the moment when she told her mom she felt different than the other girls. “I knew how I felt and what I kind of identified as…but, I didn’t know anyone else that was gay or a lesbian. So I didn’t really know how to word it. So I was just like, ‘I think I should let you know that when I eventually get a boyfriend, they’ll be a girl.’ And she was just like, ‘I know.'”

Photo by Rich Polk/Getty Images for IMDb.com
Get the best of FASHION in your inbox Thanks for signing up!
The latest fashion, beauty and celeb news delivered right to your email #FASHIONforall Now, check your inbox to complete your subscription
We won’t ever use your email address for anything else
Want even more FASHION? Follow us on social media.