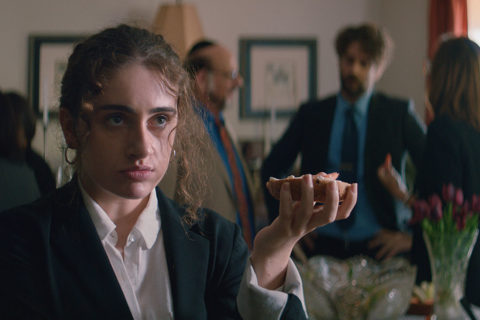 TIFF 2020 kicks off on September 10, and while this year’s lineup is greatly reduced due to the coronavirus pandemic, there’s still plenty to look forward to. Read on for the projects by Canadian filmmakers we’re most excited to watch this year.

Beans
Based on the true story of the Oka Crisis, this film by first-time director Tracey Deer chronicles the three-month standoff between two Mohawk communities and government forces in Quebec in 1990. Told through the perspective of a 12-year-old Mohawk girl named Beans, the coming-of-age drama tackles important topics like Indigenous identity, activism and protest.

No Ordinary Man
From Canadian filmmakers Aisling Chin-Yee and Chase Joynt, this documentary maps out the life and career of Billy Tipton, a 20th-century American jazz musician and trans icon. Tipton gained fame across the United States in the 1940s and ’50s but his trans identity wasn’t revealed publicly until after his death in 1989. The film serves to honour his legacy through a diverse group of contemporary trans performers, while also examining the intense media scrutiny faced by members of the trans community.

Shiva Baby
This debut feature from Canadian filmmaker Emma Seligman emerged from a short film she directed as her NYU film school thesis. Taking place over the course of a shiva she attends with her parents, the film follows the protagonist as she deals with curious family members, embittered exes and more.

Inconvenient Indian
Based on an award-winning book, this documentary examines the ongoing colonization of Indigenous peoples in North America, particularly the colonization of history, culture and traditions. Directed by Indigenous actress/filmmaker Michelle Latimer, the documentary features archival footage, interviews, dance, visual arts, and traditional customs like tattooing and hunting.

Enemies of the State
This unsettling documentary tells the story of an American family seeking political asylum in Canada after their “hacktivist” son is targeted by the US government for his alleged ties to WikiLeaks.

Sonia Kennebeck's (@skdocs) bizarre tale of secrets and lies, ENEMIES OF THE STATE, follows an American family seeking refuge in Canada after their hacker son is targeted by the US government. #TIFF20 https://t.co/R3HNh0ajbF pic.twitter.com/e43LywhZvh

The New Corporation
Canadian filmmaker Jennifer Abbott and University of British Columbia law professor Joel Bakan are teaming up again for a sequel to their award-winning 2003 documentary, The Corporation. Their latest film exposes the current trend of companies rebranding themselves as socially responsible, and features thinkers and leaders like Anand Giridharadas, Alexandria Ocasio-Cortez and Katie Porter.

.@joelbakan and Jennifer Abbott's THE NEW CORPORATION: THE UNFORTUNATELY NECESSARY SEQUEL exposes how companies are desperately rebranding as socially responsible — and threatening democratic freedoms in the process. #TIFF20 https://t.co/aOlXIfVwSQ pic.twitter.com/HZhhMsoRgG

Autumn will be joined by @NaomiAKlein for a free conversation on climate activism and its impact.https://t.co/8yY8x45DnB #TIFF20 pic.twitter.com/v9Wsy0K2no

Trickster
Based on Eden Robinson’s bestselling novel, this supernatural series from the CBC is directed by Michelle Latimer and follows an Indigenous teen struggling to support his dysfunctional family amid myth, magic and monsters.

Violation
Canadian filmmaking duo Madeleine Sims-Fewer and Dusty Mancinelli, whose previous short works have won various awards, return to the festival with their debut feature-length film. Following a pair of estranged sisters who reunite for a weekend getaway, the psychological thriller explores themes of violence, betrayal and revenge.