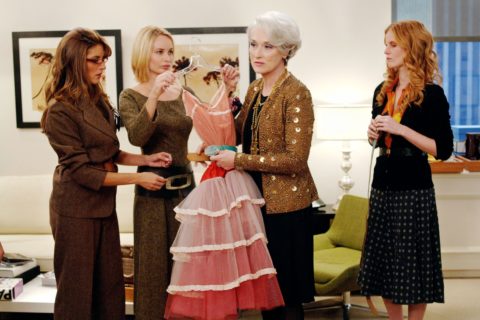 Gird Your Loins, The Devil Wears Prada Musical Will Debut in 2020

"Everybody wants to be us"

The Devil Wears Prada is one of those films that only gets (even) better with time. Released in 2006, it resonated with many of us in the fashion industry, and beyond, and became a cult classic with good reason.

The movie was based on the book of the same name, written by Lauren Weisberger in 2006, and starred Meryl Streep (as if you could forget) and Anne Hathway in the lead roles of Miranda Priestly and Andy Sachs. Now, the movie is being turned into a musical which will hit the stage in 2020.

According to Playbill, the musical will make its debut at the James M. Nederlander Theatre in Chicago on July 14, 2020. Following that it will head to Broadway.

The film is being adapated for the stage by Anna D. Shapiro (a Tony Award winner, naturally) who will serve as the director, with Paul Rudinick producing the book and Shaina Taub looking after lyrics. Excitingly, Elton John has signed on the create the music to accompany the show.

The official description of the show reads, “Andy, an ambitious young writer in New York City, lands a job at a prestigious magazine. Trying to survive under her stylish yet terrifying boss, she finds herself caught between the dreams she thought she wanted, and the cost of what reality brings. A joyous, funny, and – of course – ultra-glamourous story about navigating life’s runway to discover where you’re meant to be, The Devil Wears Prada is a new musical that gives the hit film a fabulously fresh makeover. Sometimes the best fashion statements are sung.”

There’s little else known for now, with casting and future dates to be announced in due course. We already can’t wait to see Miranda come to life on the stage – here’s hoping her famous catch-cry, “that’s all”, gets made into a stellar anthem.

Photo by Barry Wetcher/20th Century Fox/Kobal/Shutterstock
Get the best of FASHION in your inbox Thanks for signing up!
The latest fashion, beauty and celeb news delivered right to your email #FASHIONforall Now, check your inbox to complete your subscription
We won’t ever use your email address for anything else
Want even more FASHION? Follow us on social media.