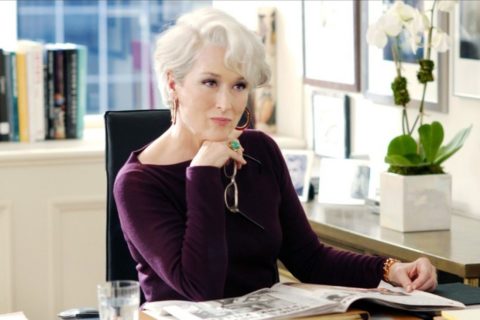 Everyone’s favourite fashion book-to-film adaptation, Devil Wears Prada, will soon be on Broadway. While we heard about this news back in 2015, we finally got confirmation on who’s going to be the behind the project, and it’s none other than Sir Elton John and famous American playwright Paul Rudnick.

According to Billboard, Broadway producers Bob Cohen of Fox Stage Productions and multi-Tony Award winner Kevin McCollum, the decision was a no-brainer.

“We needed artists whose work has run the gamut from music and publishing to drama and fashion,” said Cohen and McCollum in a joint statement. “We could think of only two names: Elton John and Paul Rudnick…That’s all!” We think Miranda Priestly would certainly approve.

So what can we expect from the musical? While no casting details have been released yet (however, Meryl Streep, Anna Hathaway and Emily Blunt have showed off their musical talents in the past, #justsaying), we’re already dreaming up possible song titles like “Cerulean,” “Are you wearing the Chanel boots” and “Everyone Wants to Be Us.”

“Re-imagining The Devil Wears Prada for the musical theatre is super exciting,” John told Billboard. “I’m a huge fan of both the book and the feature film and a huge aficionado of the fashion world. I can’t wait to sink my musical teeth into this hunk of popular culture.”

We already make references to the movie on the regular, but with Elton John behind the score, we’ll surely be singing the biggest hits all over the office.