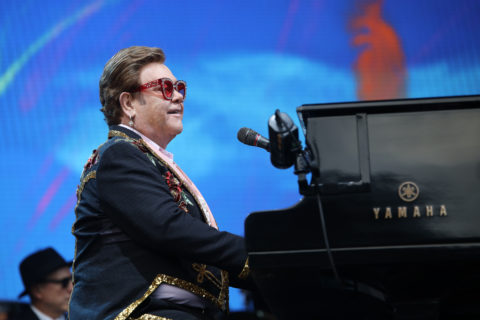 Including The 519's first-ever virtual gala (featuring Elton John) and the 20th edition of the BIPOC-focused Reelworld Film Festival.

From a Canada-wide online art festival by Art Toronto to a virtual gala hosted by The 519 in support of Toronto’s LGBTQ community, here are all the digital events to mark on your calendar this month and beyond.

Each year, The 519—Canada’s largest LGBTQ2S community centre—throws a gala to raise funds in support of its programs and initiatives. This year, the Toronto-based organization is hosting a virtual gala featuring musical performances and special appearances by the likes of Elton John, Margaret Atwood, Buffy Sainte-Marie, The Barenaked Ladies and more. “Over the years, many of the performers who’ve participated in the Annual Gala became friends of The 519 and they have graciously offered to come back this year for this one-of-a-kind celebration,” The 519’s Honorary Patron Salah J. Bachir said in a statement. The 519 virtual gala will be livestreamed on Sunday, October 25 at 7.30pm EST. Find more details here.

The 519 Virtual Annual Gala 2020 is excited to welcome Buffy Sainte-Marie (@buffybuffy1963) and Billy Newton-Davis (@billynewtondavis) Thanks you for joining us in supporting our LGBTQ2S communities. Read more about Buffy Sainte-Marie and Billy Newton-Davis at The519.org/programs/gala2020-artists. The Annual Gala 2020 will be streamed on October 25 at 7:30pm, in addition to a host of other leading Canadian and American talent from across Broadway, Blues, Pop, Jazz, and Pop genres. Join us! Get your tickets here: bit.ly/519virtualgala Buffy Sainte-Marie photo by Matt Barnes.

As the world’s largest Indigenous film and media arts festival, ImagineNATIVE focuses on the film, video, radio and new media work of Indigenous, Aboriginal and First Peoples from around the world. The Toronto-based festival is, understandably, going virtual this year, with a 2020 festival slate featuring the work of 153 Indigenous artists in 23 languages from 13 countries and 97 Indigenous nations. Some of the titles at this year’s festival include Inconvenient Indian, a documentary directed by Métis/Algonquin filmmaker Michelle Latimer; Monkey Beach, directed by Cree/Métis filmmaker Loretta Todd; and The Legend of Baron To’a, directed by Māori/Pasifika filmmaker Kiel McNaughton. The festival runs from October 20 to 25. Get more details here.

Reelworld is the largest national platform dedicated to the inclusion of more Canadians identifying as Black, Indigenous, Asian, South Asian, Middle Eastern and Latinx in the country’s screen-based industries, and the 20th edition of its annual film festival runs this year from October 14 to 19. The 2020 festival features their largest lineup of films to date, with titles like KENBE LA, Until We Win, a documentary about Haitian artist/activist Alain Philoctète; horror film The Curse of Willow Song; and Nolan: Here Nor There, about a young man on a reserve in Saskatchewan struggling to come to terms with the unexpected death of his brother. Get more details here.

Today’s the day- our 20th annual film festival is now live! Today we also celebrate 20 years of supporting Black, Indigenous, People of Colour creatives, advocating for change, and being one of the first national organizations to do so. We take pride in our stance in pushing racially diverse creatives to the forefront who have the talent, passion, and drive, but are unfortunately not often given the platform otherwise, due to discriminatory systems and barriers in the industry. Reelworld has not and will not stop seeking and invoking change in the screen-based industries and will continue to highlight the wealth of talent in our communities in the process. Our all-access pass holders now have access to our entire film lineup on demand, industry panels, and more. A special thank you to our wonderful opening night supporter, TD Bank Canada (@td_canada) for believing in Reelworld and our mission! If you haven’t purchased your pass yet, it’s not too late! Visit reelworld.ca/festival to purchase and for film info and anything else you would want to know about the festival. Click the link in our bio to sign up for FREE online industry panels, accessible world-wide! #reelworld #reelworld2020 #filmfestival #diversitymatters #canadianfilm

For the first time in 21 years, Canada’s biggest contemporary art fair, Art Toronto, will take place in a hybrid format featuring both a virtual showcase and in-person installations across the country. In a North American first, the fair has commissioned an Augmented Reality artwork by Guelph-based artist Jenn E Norton, which is available for download to the public through Instagram and Facebook as of today. Get details about the art fair, which runs from October 28 to November 8, here.

Caviar20 (@lovecaviar20) brings work by Joanne Tod (@joannetodstudio) for ArtTO2020⁠.⁠ ⁠ Joanne Tod (b.1953) is a Canadian artist renowned for her masterful figurative paintings. She has depicted a wide range of subjects throughout her illustrious career, including her recent portraits of the Toronto Raptors.⁠ ⁠ This untitled work (aka. "Tattooed Embrace") is somewhat of an anomaly in her practice, yet simultaneously shares many characteristics with her best known creations. While the human faces are absent, and the bodies anonymous, the rendering of muscle and flesh is meticulous and precise, yet demonstrates a certain softness. ⁠ ⁠ Launching with a benefit for the @AGOToronto, Canada’s art fair takes place October 28 through November 8.⁠ ⁠ ArtTO Principal Sponsor: @RBC⁠ ⁠ Image: Joanne Tod, Tattooed Embrace, 2020.

The 2020 edition of the Toronto Reel Asian International Film Festival will be fully virtual and available Canada-wide for the first time. This year’s lineup features 58 films from countries like Canada, Korea, Japan, China, India, the US and the UK, with 59% directed by women and non-binary filmmakers. The festival will open with Down a Dark Stairwell, a documentary about the events surrounding the shooting of a black man in Brooklyn by a Chinese-American police officer. Access to the opening night event will be free with the support of the CBC. The week-long festival, which runs from November 12 to 19, will close with a live script reading of Scarborough, the forthcoming screenplay adaptation of Canadian writer Catherine Hernandez’ critically acclaimed novel of the same name. Get details about the festival here.

The 24th edition Toronto Reel Asian International Film Festival is going fully digital from Nov 12 – 19 with a large selection of programming available across Canada unlike ever before. With over 60 films and creative works, there’s something for everyone to take part in from wherever you are. ⁣⁣ ⁣⁣⁣ Full programming lineup and tickets are now available on reelasian.com. Details on availability across Canada and internationally vary by programme. 〰️ #reelasian24⁣ ⁣⁣ accessibility text: illustration depicting figure with long curly dark hair looking down as birds and branches surround figure. Text that reads Toronto Reel Asian International Film Festival, 24th edition, digital.