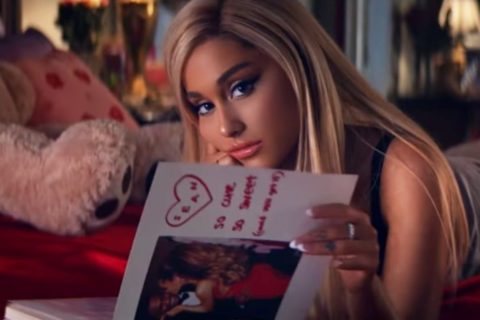 What is the web-o-sphere angry about this week? Melania Trump getting festive with dystopian Christmas decorations, Ariana Grande making front page news, and a little girl getting laughed at for being named ‘Abcde.’ Here’s everything you need to know.

THE STORY: Earlier this week, the White House unveiled its 2018 holiday decorations. First Lady Melania Trump, who reportedly spent months working on this year’s display, opted to line the East Colonnade of the White House with blood-red Christmas trees.

@StephenKing couldn't have come up with a better horror scene…
Red trees covered with the blood of South American immigrant children that #TrumpPrinceOfDarkness? ripped from their mothers arms…

Melania Trump, Mother of Forests, creating flesh trees before our eyes. step 1 (2017): bones. step 2 (2018): flesh. we can only assume that next year the trees will have human skin, and the following year, hair and eyes. they will love her as children and serve her as minions pic.twitter.com/gEpa4BhJGh

Here Melania- someone fixed the red trees for you! pic.twitter.com/bToSYTL4V6

RIGHTEOUSNESS OF THE RAGE: Melania Trump’s design aesthetic—whether she’s wearing a tone deaf Zara jacket or posing for her official White House portrait—is almost always met with derision and bewilderment. Usually, she deserves it. But, as much as I appreciate the jokes and memes the ‘hallway of tampons’ has spawned, I have to side with FLOTUS on this one. On Wednesday, November 28th, Melania Trump spoke at Liberty University and took the opportunity to address the trees, chalking up the controversy to a difference in taste. “We are in the 21st century and everybody has a different taste,” she said. “I think they look fantastic. I hope everybody will come over and visit it. In real life, they look even more beautiful. And you are all very welcome to visit the White House, the people’s house.”

Hey, when Starbucks turned their holiday cups solid red, I did defend them. Is this really that different? In a different space and under different circumstances, a solid red Christmas tree might actually look cool and contemporary.

A CNN reporter doesn’t think Ariana Grande’s “thank u, next” video is newsworthy

THE STORY: Oliver Darcy, the senior media reporter at CNN, took a screen shot of BuzzFeed News’ homepage showcasing Ariana Grande’s new “thank u, next” video in the lead story spot. “BuzzFeed does a lot of great journalism,” Darcy captioned the image, “so how is this the lead story on BuzzFeed NEWS dot com?”

because it's newsworthy? Did you see just how many people watched the video drop live?? It's been one of the biggest pop culture events of the year!

Find yourself a social media reporter that understands the importance of pop culture.

Hate to burst your journalistic bubble but the news does not revolve around Trump. As much as we try to make it so.

Anything newsworthy is news. It’s how you keep readers reading.

RIGHTEOUSNESS OF THE RAGE: A few things: 1) Readers are allowed to have varied interests. It’s possible for someone to care about an Ariana Grande music video and an investigation into an ex-Dallas police officer. 2) The video broke the YouTube record for most views in 24 hours. This Buzzfeed writer clearly isn’t the only person who cares about this. 3) In the world of digital media, clicks are cash. The strong investigative journalism Buzzfeed News does is funded and fuelled by their roots as an entertainment site. The listacle fluff they write shouldn’t discount the journalism they do, and the journalism they do shouldn’t discount an Ariana Grande news story getting the prime slot.

THE STORY: A mother claims that Southwest Airlines employees mocked her five-year-old daughter, named Abcde, as the duo boarded a flight in Orange County, California. Apparently (and understandably) the gate agent laughed at the name — which is pronounced ‘Ab-city’ — and posted a picture of her boarding pass online. “The gate agent started laughing, pointing at me and my daughter, talking to other employees. So I turned around and said, ‘Hey, if I can hear you, my daughter can hear you, so I’d appreciate if you’d just stop,'” Traci Redford, the mother of Abcde, told ABC News.

You are mad someone is making fun of your girls name and you named her “Abcde”? What did you… think… was… gonna… happen… https://t.co/wpzu4rNBT4

Now, it's time for the adult(s) who named their child "Abcde" to apologize. https://t.co/8qk2Orb4L5

They aren’t mocking her daughter – they are mocking the mom for the name. Feel bad for the little girl and have no doubt she will seek to change it as soon as she can. #notthekidsfault

RIGHTEOUSNESS OF THE RAGE: Does Ms. Traci Redford realize how much worse she’s made this unfortunate situation? Instead of just a few airline employees (and their Facebook friends) joking about her poor daughter’s name, the whole Internet has turned her into a punchline. I hope Abcde has thick skin, she’s going to need it.