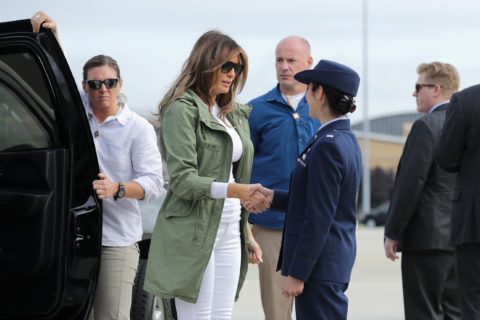 Melania Trump is at it again with the wildly inappropriate fashion choices. Last year, she was widely criticized for wearing spindly heels to visit a Houston flood zone devastated by Hurricane Harvey. Critics suggested it was in poor taste that the First Lady donned a pair of footwear that telegraph wealth and status on a visit to people who just lost their homes.

Now, Melania Trump has been photographed wearing an item that’s less poor taste than it is downright offensive. Earlier today, Melania was photographed wearing an army jacket with the words “I REALLY DON’T CARE, DO U?” scrawled on the back, as she made her way to Texas to visit detention centres where young migrant children are currently being separated from their parents.

Paparazzi images show the First Lady wearing the jacket, identified as a $39 Zara item, with a skintight white jeans and Adidas Stan Smiths as she exits an SUV with a pressed facial expression.

Trump’s spokeswoman, Stephanie Grisham, was dismissive in regards to criticisms levelled at the appropriateness of the jacket: “It’s a jacket. There was no hidden message. After today’s important visit to Texas, I hope the media isn’t going to choose to focus on her wardrobe,” she said.

Yet considering the previous criticism directed at the First Lady’s wardrobe choices, it’s difficult to believe Melania wore the jacket without any idea that the message might be interpreted past a surface level. So is she suggesting she doesn’t care about migrant children? Or is is the message directed at her husband, that she doesn’t care about his policies and she’s visiting the children anyways?

Either way, clothes speak volumes about the inner life of the wearer, and it’s especially crucial for the  First Lady to take accountability for the messages her clothes send rather than shrug off all criticism as a misinterpretation. At worst, this move could be a tactic to get press talking about her jacket rather than the issue at hand: innocent children being forcibly separated from their parents, held in cages,  and shipped off into foster care with uncertain futures.