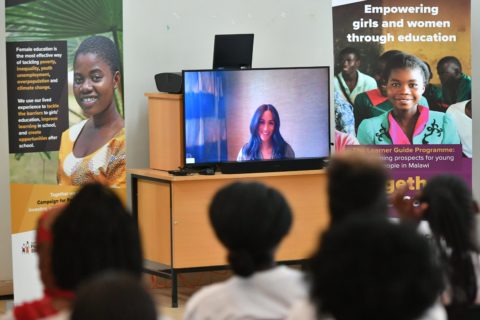 The royal couple continues melting hearts around the world.

The Duke and Duchess of Sussex kicked off their first overseas royal tour with Prince Archie yesterday, and unsurprisingly, the royal trio began making headlines from the moment they stepped off the plane in South Africa. Here, the royal family’s cutest moments from the trip so far.

He may be just four months old but Prince Archie has been generating buzz since the day he was born. This time, as he and his famous parents deplaned in Cape Town, viewers were quick to note that the pom-pom beanie he was wearing bore a strong resemblance to a hat Princess Diana outfitted Harry in for a plane ride in 1985. Prince Harry has been praised often for the subtle homages to his mother in various aspects of his life, and this sweet nod, too, didn’t go unnoticed.

Archie dons a sweet knitted bobble hat for his arrival in South Africa that looks VERY similar to one worn by Prince Harry for a flight with Princess Diana in 1985 https://t.co/RO9yw98c0U

On their first stop on the royal tour, the couple spent their time interacting with children and young people involved with human rights organization The Justice Desk in Nyanga. As the two prepared for a photo op with a group of children, Prince Harry accidentally mussed his wife’s hair while putting his arm around her shoulder. But no fear! He smoothed it right back out and smiled for the camera.

The Duke is at it again!❤️??‍♀️? Who rememberers when he did this in Morocco too ?? ?? . . Meghan and Harry arrived at Cape Town’s Nyanga Township arrived?❤️! At the township they visited a workshop that teaches children about their rights, self-awareness and provides female empowerment training to girls in the community. . . Please be sure to follow my back up page @duchessofsussex__ or even just take note of the username just in case something happens to my account! . . #meghanmarkle #duchessofsussex #royalfamily #britishroyals #royals #princeharry #sussexroyaltour #royaltourafrica.

The royal couple were also pulled into an uproarious dance circle as they were leaving Nyanga. The Duchess showed off her sense of rhythm by sashaying with one of the young dancers, while Prince Harry grooved to the beat a bit before moving on. “Meghan’s a good dancer,” said Lilitha Mazana, who danced with the royal. “She’s very nice. Her skills were fantastic.”

The dancing Duchess! Lovely scenes as Harry and Meghan depart Nyanga – and get involved in the party! . . . . . . #duchessofsussex#dukeandduchessofsussex#harryandmeghan#royalvisitsouthafrica#royal#britishroyalfamily#meghanmarkle#princeharry#capetown#southafrica#duchessmeghan#sussexroyaltour

On day two of the tour, the couple melted hearts everywhere with a little PDA. After wrapping up their visit to Monwabisi Beach to meet with the NGO Waves for Change, Prince Harry had to leave for solo engagements and gave Meghan a kiss goodbye. The royals also praised each other’s parenting skills while meeting with surf mentors from the nonprofit group, referring to each other as “the best dad” and “the best mom.”

Harry and Meghan were seen to share a kiss today as they got into separate cars – she was going back to Archie and he was off to another engagement. pic.twitter.com/wlsUy1ZYHd

After the royal family’s visit with Archbishop Desmond Tutu, the Duchess headed for a solo engagement to Mothers2Mothers, a charity that provides support to pregnant women and mothers living with HIV. Not only did the Duchess decide to sit cross-legged on the floor to play with the children, but she also brought with her two large bags of “loved but outgrown” clothes that had belonged to Archie or her friends’ children. “It’s so important we’re able to share what’s worked for our family and know that you’re all in this together with each other,” she said. “So we just wanted to share some things from our home to each of yours.” Before leaving the charity, the Duchess brought several of the mothers and children in for a group hug.

More special moments from Cape Town, where The Duke and Duchess are embracing connecting as a community. Here are some more of our favourite images from The Duchess's visit to @mothers2mothers. #RoyalVisitSouthAfrica Photo © PA images / EMPICS / @UkinSouthAfrica

On Sunday, as Prince Harry arrived in Malawi, Meghan joined him via Skype (in a royal first!) while her and baby Archie remained back in South Africa. The Duchess of Sussex made a surprise appearance by joining her husband via Skype at an event at the Nalikule College of Education in Malawi. Meghan’s unexpected appearance took place in front of students and alumni who have received U.K. scholarships through the Campaign for Female Education, an international non-profit with a goal of “supporting girls to go to school and succeed “. During the video call, Meghan said, “I wish I could be with you, we’re in South Africa right now Archie’s taking a nap. I’m with you in spirit.”

Photo by Dominic Lipinski - Pool /Getty Images
Get the best of FASHION in your inbox Thanks for signing up!
The latest fashion, beauty and celeb news delivered right to your email #FASHIONforall Now, check your inbox to complete your subscription
We won’t ever use your email address for anything else
Want even more FASHION? Follow us on social media.