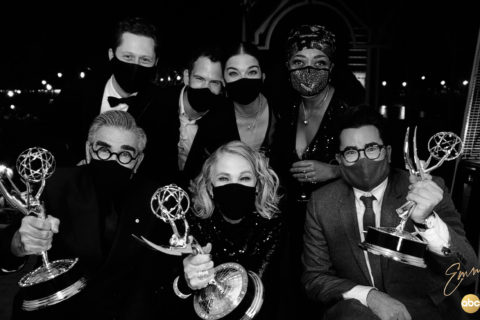 Schitt’s Creek Made History With Its Emmy Wins Last Night

The 72nd Emmy Awards were unusual in many respects right off the bat. Due to the coronavirus, all the nominees—spread out across 10 countries and 20 cities—stayed home (or got together in small, socially-distanced groups), Jimmy Kimmel hosted the event alone in an empty room, and winners were handed their statues by presenters in hazmat tuxedoes. But amid even these most unusual circumstances of the 2020 Emmys, the Schitt’s Creek team managed to make some history of their own.

The winners ripped off their masks and made impassioned speeches from their little gathering in Toronto, where many of the cast members, including Noah Reid and Karen Robinson, were present.

“Our show at its core is about the transformational effects of love and acceptance, and that is something we need more of now than we ever needed before,” Levy said as he and his father accepted the best comedy series award.

Earlier in the week, the show also took home the Best Casting and Best Contemporary Costumes prizes, bringing its total to nine and breaking the record of eight that The Marvelous Mrs. Maisel won in 2018 and 2019. The 2020 Emmys mark the first acting wins for comedy legends O’Hara and Levy, who had previously won writing Emmys for their work on SCTV.

“I will be forever grateful to Eugene and Daniel Levy for bestowing upon me the opportunity to play a woman of a certain age, my age, who gets to fully be her ridiculous self,” said the 66 year-old actress during her acceptance speech.

Once again, let’s give it up for the Roses. They always did know how to thrive under strange circumstances.