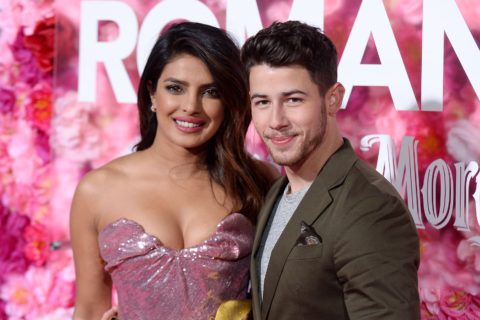 Haters will say it's photoshop.

The 2019 VMAs played out on Monday evening with a whole host of stars in attendance. However there was one face noticeably absent from the ceremony: Priyanka Chopra, actress and wife of Nick Jonas. The Jonas Brothers were nominated for a slew of awards on the night and ultimately walked away with the award for Best Pop song for their hit track Sucker.

When the result was announced, the trio jumped to their feet, with Kevin kissing wife Danielle and Joe kissing wife Sophie Turner, leaving Nick in the middle alone. To his credit, Nick leaned into the moment, aware of his solo standing.

The televised moment quickly circulated on social media with one commentator writing that Nick “is a perfect representation of my love life right now.”

Chopra, who couldn’t attend due to filming for her latest movie, got in on the action, sharing a photoshopped image of the moment on her Instagram page. Alongside the image she wrote, “I’m always with you @nickjonas,” followed by some cheeky emojis before continuing, “Congratulations @jonasbrothers! I’m so proud of all of you! #sucker.

The post has received almost 3 million likes in less than 24 hours.

The Jonas family delivered several Insta-worthy moments on the evening, particularly when Shawn Mendes and Camila Cabello were performing Señorita. Plus, footage circulated on social media last night showed Sophie meeting Queer Eye‘s Jonathan Van Ness in a high-pitched lovefest that was so sweet. It’s no secret that JVN is a huge Game of Thrones fan and he congratulated Turner on her character’s ending in the show, as well her “gorgeous summer” in reference to her wedding. Towards the end of the clip, Turner asks if Jonathan has met Joe yet and calls to her husband to come over. Catch the cute moment below:

Photo by Broadimage/Shutterstock
Get the best of FASHION in your inbox Thanks for signing up!
The latest fashion, beauty and celeb news delivered right to your email #FASHIONforall Now, check your inbox to complete your subscription
We won’t ever use your email address for anything else
Want even more FASHION? Follow us on social media.