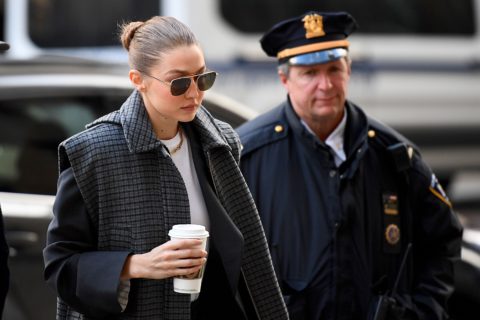 Gigi Hadid was under consideration to be a juror in the Harvey Weinstein trial
According to a pool reporter inside the courtroom for jury selection for Harvey Weinstein’s upcoming criminal trial, 24-year-old supermodel Gigi Hadid was being considered—among 120 others—to be a potential juror in the case. According to The Guardian, she revealed during the first round of juror questioning that “she had met Weinstein personally though she said that she still felt able to be fair and impartial were she put on the jury.” After the judge read out the list of potential witnesses, he then asked the potential jurors whether they knew anyone on the list. Hadid raised her hand, saying, “I have met Selma Hayek,” but that she would still be “able to keep an open mind on the facts.” Eventually she was dismissed as a potential juror, and a jury of five other women and seven men was assembled.

Supermodel Gigi Hadid was dismissed from the jury pool in the Harvey Weinstein trial https://t.co/aYNeyp0pwO pic.twitter.com/bk2jlEjorQ

Paris Musées made thousands of famous artworks available for download online
Paris Musées, a public institution incorporating the French capital’s 14 museums, just uploaded 321,178 works of art—including paintings, photographs, sculptures and coins—to its website. According to Vice, “more than 150,000 of those images are in the public domain and users can download them in glorious 300 DPI high definition.” Some of the artists whose work is available for download include Auguste Roubille, Paul Cézanne and Rembrandt.

The Songwriters Hall of Fame announced its 2020 inductees
The Songwriters Hall of Fame revealed its new honourees on CBS This Morning this past week, and naturally, there were some big names on the list. Mariah Carey, with 19 Number 1 songs to her credit, is one of the new inductees, as are Eurythmics, the Neptunes and Steve Miller. “This is truly one of the greatest honours of my career,” Carey wrote on Twitter. “I’m so proud and humbled to be in the company of such legendary songwriters — both previously inducted as well as the incredible class of 2020!”

I can't believe it… The SONGWRITERS HALL OF FAME!!!! ?? This is truly one of the greatest honors of my career. I'm so proud and humbled to be in the company of such legendary songwriters – both previously inducted as well as the incredible class of 2020! ?? @SongwritersHOF pic.twitter.com/Pi4R7yrRYD

Apple TV announced a deal with Julia Louis-Dreyfus
After projects with Jennifer Aniston, Reese Witherspoon, Jason Momoa, Oprah Winfrey and M Night Shyamalan, Apple TV has announced the latest superstar joining the television empire. According to Variety, the multiple Emmy-winning actress Julia Louis-Dreyfus has “inked an overall deal with Apple TV Plus to develop new projects exclusively for the platform as executive producer and star.” In a statement about this new deal with the streaming service, Louis-Dreyfus said, “I am thrilled about this new partnership with my friends at Apple. Also, many thanks and kudos to my representatives for structuring the deal in such a way that I am paid in AirPods.”

And ICYMI, the 2020 Oscar nominees were revealed this week.

Photo by JOHANNES EISELE/AFP via Getty Images
Get the best of FASHION in your inbox Thanks for signing up!
The latest fashion, beauty and celeb news delivered right to your email #FASHIONforall Now, check your inbox to complete your subscription
We won’t ever use your email address for anything else
Want even more FASHION? Follow us on social media.