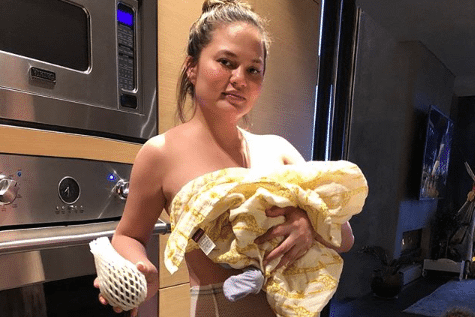 All the News You Missed While Obsessing Over the Royal Wedding

I'm out from under my Royal Wedding rock and ready to re-enter society.

If you’re anything like me, you woke up from your royal wedding coma Monday morning to realize how much stuff has gone down. For example, did you know that the Billboard Music Awards were this weekend?!? Here’s a quick update to get us all up to speed in what happened in the world of celebrity news these past couple of days.

Chrissy Teigen Had a Baby

Hello, world! This is Miles Theodore Stephens – We are drowning in his little peeps and nuzzles. Our household feels overwhelmed with love. Thank you for all your well wishes!

The Internet’s favourite family just added a new addition after Chrissy Teigen gave birth to her second child, Miles. Teigen tweeted about their new arrival on May 16, but waited until May 20 to post a picture of her and John Legend’s son. Thankfully, the mother of two is feeling well enough to still be her hilarious self on social media. From graphic remarks about the birth to calling out her husband for performing at the Billboard Music Awards so soon after little Miles’ arrival, Chrissy is continuing to keep it real. She even shared a hilarious video of daughter Luna looking less than thrilled at her dad’s tribute to her new sibling at the BBMAs.

she is uhhhh not thrilled with this tribute @BBMAs pic.twitter.com/dq9sNp4zqo

Saturday Night Live’s Pete Davidson and Ariana Grande are in the beginning stages of a relationship, reports People. According to the report, Davidson was backstage supporting Grande during last week’s BBMAs where she performed her new single “No Tears Left to Cry.” The pair was then seen hanging backstage with some of Grande’s friends, with Davidson’s arm casually around her shoulder. This news comes soon after Grande and long-term boyfriend Mac Miller broke up earlier this month after nearly two years together.

My first award show in a few years and it was so much fun thanks to you ? I love you guys. PS thanks @versace for this ✨delicate✨ dress. ?: @gettyentertainment

Taylor Swift walked her first red carpet in nearly two years. She debuted her first post-Reputation look at Sunday’s Billboard Music Awards— and it was definitely worth the wait. The singer wore a lavender Versace gown with a thigh-high slit to show off her endless legs. The sweeping fabric was juxtaposed with silver embellishments showing us what to expect from the new Taylor (you know, since the old one is dead). She returned in true Swift fashion, taking home two major awards of the evening, Top Selling Album and Top Female Artist. She also helped out host Kelly Clarkson by serving up a major eye-roll as part of a bit when Clarkson sang “Look What You Made Me Do”

Glad to hear that Melanie is doing well. Please let us know if you hear from Melania. @realDonaldTrump pic.twitter.com/N2jVnUH5cG

President Trump got a lot of slack after misspelling his wife’s name on Twitter. Melania Trump underwent a procedure on her kidneys and as a result, was required to spend a few days in the hospital. Concerns arose when the White House said that Melania would remain in the hospital for about a week for a procedure that medical experts say is often a day surgery. Regardless, Melanie/Melania is back at home and Trump has since edited the tweet.

Miley Cyrus joined Britney Spears and Rihanna in the list of celebrities that have broken into Jimmy Kimmel’s home. Cyrus and Kimmel’s wife schemed the whole thing, which included Cyrus with a sledgehammer, dancers and a human wrecking ball all jumping on Jimmy’s bed at 1:00 AM. Cyrus appeared to really, really enjoy the whole ordeal, while Kimmel seemed to be all too familiar with starting his mornings like this. Once he woke up, a sleepy Kimmel turned to his wife and said “how many times is this going to happen?” and then joked in his monologue that this is now a segment.

Camila Cabello Pulled out of a Tour Date

After the Billboard Music Awards, Camila Cabello released this statement on her Twitter saying that she won’t be able to perform her opening set at the Seattle show of Taylor Swift’s reputation tour. The singer was checked in to the hospital after her performance at Sunday’s BBMAs. Luckily, the Cabello is not seriously ill and should recover in time for future performances on the tour.

ok for the few complaints i see saying i showed up “4 hours late” to my pop up. I want to make it clear i don’t get to choose what time i go. i would be there an hour before it opens if it were up to me. but it’s up to the police who …

shut down the street at a certain time and let me know when they believe i should come because i feel strongly about being there to see everyone’s faces.

According to Us Weekly, fans of Kylie Jenner were upset when the star reportedly showed up four hours late to a Kylie Cosmetics pop-up in San Fransisco on Friday. Jenner then took to social media posting a series of tweets explaining that she does not determine what time she arrives at the events, saying “if I didn’t love doing these pop ups and seeing you all i wouldn’t do them at all!”