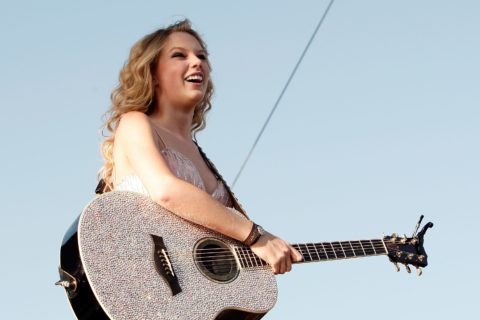 A Eulogy for the ‘Old Taylor’

“I’m sorry, but the old Taylor can’t come to the phone right now. Why? Oh, ’cause she’s dead.”

We gather here today to pay our final respects and bid a sad but fond farewell to the Old Taylor Swift. Old Taylor, murdered at the hands of New Taylor’s super edgy rebrand, was taken from the bosom of her Swifties and her #Squad far too soon. In the days after her untimely death, let us take moment to reflect on the legacy she left behind.

Old Taylor had enviable blonde waves, sultry blue eyes, and awkward gangly limbs that poked out from polka-dot sundresses. Old Taylor had a BABY-FACE, and wore cowboy boots while she shed teardrops on an acoustic guitar. She was the sweet, innocent Girl Next Door who sang about kissing in the rain, finding her Romeo and wearing T-shirts sitting on the bleachers. Old Taylor started songs with “Once Upon a Time” and always kept things PG-13.

Old Taylor was many things to many people: GF of Harry Styles, GF of Joe Jonas, GF of John Mayer, GF of Taylor Lautner…To me, Old Taylor was that high-school BFF who you now disassociate with — but, like, when she shares your embarrassing eight year Facebook memory, you still get sentimental about the Good Ol’ Days. I can remember being preteen and listening to Old Taylor’s Fearless era “Fifteen” and thinking that shit was relatable AF. I remember blasting Speak Now in my mom’s minivan as I drove (illegally) around my suburban neighbourhood. And I’ll never forget scream-singing / rage-dancing to “I Knew You Were Trouble” at the bar in first year (also illegally) with my cool new university friends.

I’m sad she’s gone, but I understand why Old Taylor had to die. When she became a pop princess who held hands with teen heartthrobs, Old Taylor could no longer sing about football players ignoring her in the hallway. (At nearly 6 feet, with blonde hair and a very symmetrical face, it was a little unbelievable she went unnoticed to begin with.) Then, with J-14 chronicling her dating life, Old Taylor became defined by the desirable dudes she dated. She sang songs about her A-List breakups and became a “national lightening rod for slut-shaming,” (her words, not mine.) So, Old Taylor had to change. Instead of singing pop-country anthems about young heartache and heartbreak, she sang self-deprecating songs about shaking off haters, long lists of ex-lovers and the shady things we all said about her.

The more we saw her name plastered across headlines, the less sympathetic she became. “Bad Blood”? Seriously? What happened to not pitting women against each other? After the media (and Kimye) butchered her perfect-pop-star public image, what other choice did the Old Taylor have but to warg into the Heir of Slytherin and take back control of her narrative? Could Old Taylor come back from her two-year ‘everyone hates me’ music hiatus with a super relatable song about her Hiddleswift romance? LOL, no. Taylor’s always been one to sing what she knows – it’s just that Old Taylor didn’t know who she was anymore. And so, she had to die. In her place, we have Taylor 2.0: a vengeful and murderess snake queen who isn’t afraid to flaunt her pettiness.

And so, as we lay Old Taylor to rest, let us not forget what she meant for millions of tween white girls. Old Taylor was there for me; we grew up together, and she always knew what I was going through. She might be dead, but Old Taylor will never leave us (because YouTube and stuff.) #RIP Old Taylor, gone but not forgotten.