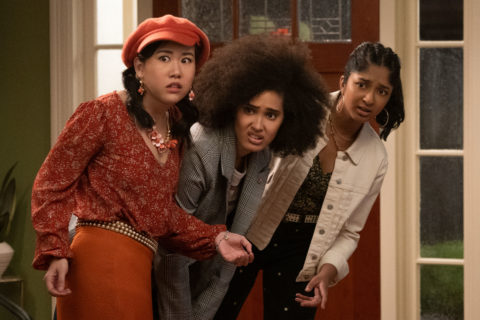 Including the season 2 release date, brand new trailer and which beloved cast members will be back.

After premiering in April 2020, Netflix’s Never Have I Ever quickly became a beloved quarantine comfort show. The binge-worthy dramedy, written by actor Mindy Kaling, is a coming-of-age story about Devi (played by Mississauga-born actress Maitreyi Ramakrishnan), a first-generation Indian American teen who’s trying to establish a cool girl image at her high school. The show follows Devi’s experiences dealing with her overbearing yet loving mother, her father’s recent passing, and her challenges trying to reach certain milestones of adulthood (like losing her virginity), with every episode full of the the classic Mindy Kaling humour we know and love.

The show received countless accolades for its debut season, so it’s unsurprising that it’s is coming back for season two this summer. Here’s everything you need to know about the upcoming season of Never Have I Ever.

What is the Never Have I Ever season 2 release date?

Never Have I Ever season 2 will premiere on Netflix on July 15. Ahead of its release, Kaling posted a picture of the script on Twitter along with a heartfelt statement: “I was 8 months pregnant in quarantine during the hottest summer ever when I wrote this. I write in bed and my belly almost covered the laptop. It was so fun to disappear into the world of these fun Sherman Oaks teens!” she said.

I was 8 months pregnant in quarantine during the hottest summer ever when I wrote this. I write in bed and my belly almost covered the laptop. It was so fun to disappear into the world of these fun Sherman Oaks teens! I can’t wait for you guys to see @neverhaveiever on July 15th! pic.twitter.com/NE4VlHMGkc

Similar to season 1, all 10 episodes of the upcoming season will drop at once — so clear your weekend and have your popcorn ready.

Who will be in season 2 of Never Have I Ever?

Isn’t Chrissy Teigen starring in Never Have I Ever season 2?

The OG cast will be joined by some fresh faces, as reported by Newsweek. The show’s second season will feature newcomers Megan Suri (known for her role on Atypical), Tyler Alvarez, Utkarsh Ambudkar, and P.J. Byrne. Rapper/actor Common will also be joining the cast as a dermatologist named Dr. Chris Jackson. The season was originally supposed to star TV personality Chrissy Teigen, however, she recently stepped down from the role due to ongoing allegations of bullying and harassment.

What’s the plot of Never Have I Ever season 2?

The second season of Never Have I Ever will continue following Devi on her high school journey, struggles and all. The new season will show our protagonist deal with pressures from school and home, while navigating new romantic relationships including a love triangle between her, Ben and Paxton, according to Deadline. Ramakrishnan posted a promotional video for the upcoming season on Twitter, featuring the return of some beloved cast members.

Is there a trailer for Never Have I Ever season 2?

You bet! Watch the season 2 trailer, dropped on June 18, below.

You can stream season 2 of Never Have I Ever on Netflix on July 15.