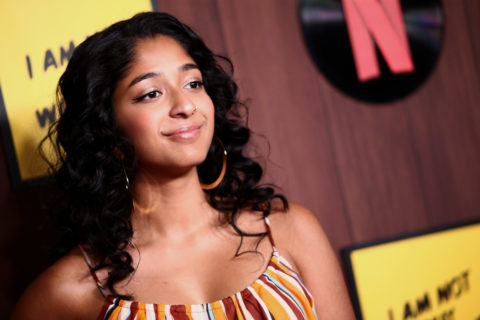 The 'Never Have I Ever' star is teaming up with Gillette Venus to normalize all skin types and textures on National Beach Day.

“I feel a sense of responsibility to be part of the fight for authentic representation of all identities,” actress Maitreyi Ramakrishnan told us over the phone earlier this week as we spoke to the Tamil-Canadian actress about her new partnership with Venus for its upcoming Skinclusive Summer Social event on Animal Crossing.

Ramakrishnan is an avid gamer (she’s clocked in over 300 hours on Animal Crossing over the past few months) so the partnership with Venus makes total sense on several levels. “I’m really happy to be part of this skinclusive mission with Venus because it speaks to my passion of representation and inclusivity, and also video games, because I love video games. There’s a lot to love.”

The event will take place next Monday, during which the actress will lead a conversation on the importance of skin diversity and representation in real life and in gaming. Guests will also watch the first ever “skinclusive” virtual fashion show which will showcase the 19 designs from the Skinclusive Summer Line by Venus which was created by digital designer Nicole Cuddihy. The line includes 19 new skin types and over 250 possible combinations of skin diversity in a bid to help gamers see themselves more accurately reflected in the online worlds they are a part of.

Having grown up in Mississauga, On., Ramakrishnan says she was surrounded by friends who were from different backgrounds which she describes as “really cool because in a way you didn’t feel like you were ‘other’ or by yourself or alone,” though she notes that she still went through her own personal journey of “figuring out my own culture.” Since starring in Mindy Kaling’s Netflix hit Never Have I Ever, the young actress has been catapulted into the public eye – and she wants to use her platform to pursue meaningful change. “I always hope to be nothing but a good rep for South Asian folks to look up to because we don’t have that as much [in Hollywood] so I’m always trying to be the best that I can. Hopefully within my career I continue to push forward to get that representation out there and find more places where I can take up space.”

One of the ways in which she hopes to do this is by playing characters that are South Asian simply because she herself is South Asian, not because it’s a specific character point. “That’s how inclusion happens,” she says.

Seeing as she’ll be talking all about skin next week, we ask about her relationship with her skin – and her answer is refreshingly honest. “I would describe it as quite chill,” she shares with a laugh. “I’ve grown out of the worries of freaking out over a pimple. That’s not to say that I’m a perfect human being that never gets upset when my skin isn’t feeling the way I want it to, there’s definitely days where it’s not working for me – it’s an ever-changing relationship. I think I’ve come to a place where I can accept it for what it is more often, which is good.”

As for what she hopes attendees will walk away feeling, Ramakrishnan says, “That those who have quote unquote imperfections with their skin don’t see it as that, as an imperfection, but rather that they’re their own [person]. I’m not expecting people to walk away feeling the best of themselves like a miracle cure but if the livestream can help to normalize different skin conditions that would be great, because it should be normal. Every little bit of effort to help push for inclusion will help.”

To sign up for the event – which is taking place at 7pm on Monday, August 31 – or to find out more information, click here.

Photo by Tommaso Boddi/WireImage
Get the best of FASHION in your inbox Thanks for signing up!
The latest fashion, beauty and celeb news delivered right to your email #FASHIONforall Now, check your inbox to complete your subscription
We won’t ever use your email address for anything else
Want even more FASHION? Follow us on social media.