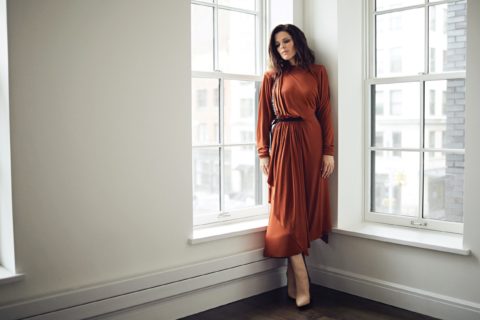 Neve Campbell on Working With 3 of #MeToo’s Biggest Villains

"It’s just sad that there are people in this world who use their power to dominate others and take advantage and harm. Within all of this, that is the horrible thing."

A few years ago, Neve Campbell found herself in a cemetery. She wasn’t alone.

She was there for a very special gathering. All around her, the people were dressed like witches—albeit ones with a very specific aesthetic: short black skirts, thigh-high stockings, chunky boots and a preponderance of either leather jackets or baby-Ts (or both). Campbell was familiar with the dress code. After all, she and her three co-stars popularized it nearly 20 years earlier in the teen witchcraft thriller The Craft.

The coven (minus Fairuza Balk) was at the Hollywood Forever Cemetery—along with their appropriately dressed fans—to screen the film. Looking back, 1996 was a very big year for Campbell. Not only did she parlay her success as one of the hot orphans on Party of Five into playing the hip, decidedly non-Sabrina-esque teenage witch but that year she also officially entered the horror film canon as Sidney Prescott, the ultimate “final girl,” in Scream.

All of these roles (but especially the latter one) would become as intrinsically tied to the mid- to late ’90s as pop punk, frosted tips and inflatable furniture. “When we were in the ’90s, we felt a little bit like we didn’t have an identity, but now, looking back on it, it seems more distinct,” she tells me over the phone from Los Angeles, where she’s reshooting some scenes for Skyscraper, her upcoming summer thrill ride with Dwayne Johnson.

“When we were in the ’90s, we felt a little bit like we didn’t have an identity, but now, looking back on it, it seems more distinct.”

Having grown up during that time, I know what she means. Earlier in the decade, there was grunge and gangsta rap, two genres deeply committed to some nebulous definition of authenticity. But by the late ’90s, when Scream happened, pop culture had moved on to more glossy, manufactured stuff that felt less specific and more broad. Ironically, that opened the door for a subtler kind of rebellion wherein we started recognizing and subverting the common pop culture tropes we were being sold—like in Scream, with every character commenting on horror clichés. That kind of meta-commentary felt natural then, but it signalled a shift in how millennials would take in culture.

It wasn’t until Campbell saw the 5,000 or so people gathered in the cemetery where Hollywood legends are buried, quoting lines back at the film like it was a showing of The Rocky Horror Picture Show, that she realized her first films weren’t just iconic but important, too. Not just to pop culture but also to the women who watched them.

“I knew that the movie had a cult following, but I didn’t realize it was to that extent,” she says. “Because, once in a while, I think about that movie and I’m like, ‘That’s a bit silly.’ But it touched people. I don’t think I quite got that. At the Q&A after the screening, a lot of people stood up and said: ‘You know, that movie really meant something to me. It gave me confidence in high school.’ For some reason, it had an impact on a certain kind of person.”

“I knew that the movie had a cult following, but I didn’t realize it was to that extent. Because, once in a while, I think about that movie and I’m like, ‘That’s a bit silly.’ But it touched people. I don’t think I quite got that.”

It’s not hard to see why teens in the ’90s would find inspiration and solace in the characters Campbell played. In Scream and Party of Five especially, she was like her vampire-slaying ’90s colleague Buffy only more grounded in reality: a tough young woman (with agency) who faced bigger problems than an impossible crush on a popular boy. But it was also how she played those characters. No one occupies that unsteady territory between fear and steely resolve like Campbell. That liminal space is where so many teenage girls live that actresses who embody that dichotomy have been totemic to young women for decades. Basically, Kristen Stewart should pay Campbell a cut of that Twilight money. Because whatever mixture of vulnerability and badassery Stewart gave to Bella Swan, Campbell perfected that mix.

She was—and still is—so good at projecting this hell-no-you-won’t-see-me-cry kind of unsteady bravado because she comes by it naturally. Sure, all actresses need some of that internal fortitude to survive in the industry—which they are only now able to be honest about—but Campbell had it at a shockingly early age.

When she was nine, she moved from Mississauga, Ont., to Toronto to attend Canada’s National Ballet School. Ballet is one of those art forms where the lottery of puberty, along with other factors completely out of one’s control, can dictate success or failure. It tests, builds and rewards resolve and maturity.

“You sacrifice the average childhood,” she says. “But at the same time you get so much from that—artistry, discipline, strength, commitment, how to function in a professional world, how to behave with directors and to take direction—and gain an understanding of hard work. Although my body visually suited ballet, it was not easy. I was constantly injured, dealing with pain and inflammation. I actually just had spinal surgery 10 weeks ago that is certainly the result of many, many years of dance and damage.”

“You sacrifice the average childhood. But at the same time you get so much from that—artistry, discipline, strength, commitment”

She left the school when she was 14, but the art form works as a kind of metaphor for life, too. When you see the graceful, precise movements of a ballerina, you can easily forget how much sheer strength is required to make something so beautiful.

Campbell moved easily from a popular television drama to regular film roles back in a time when the road between the two media was less assured. “Honestly, people were like, ‘How did you decide to do that script?’” she says. “It was the first lead I was ever offered. Not even offered—I auditioned and got it. It’s not like I had a lot of lead roles in films coming at me. It was very new for me. Getting that was a very poign­ant moment in my career.”

The reward for all that winning in the ’90s wasn’t an unyielding cycle of box office wonders or piles of golden statues collecting dust in her Brooklyn home. It was something more fulfilling for her and inimitably more interesting for us: She won freedom.

After Scream, she did surprisingly edgy roles (Wild Things) to buck being typecast and smaller, critically lauded films with interesting co-stars and idiosyncratic directors (The Company, When Will I Be Loved, Panic). She was able to mess around in British films and command the stage in London. And more recently she made indelible appearances on prestige TV shows like Mad Men and in the past two seasons of House of Cards as the Underwoods’ campaign manager.

Campbell’s career has somehow never seemed rushed or precarious. She would appear and then not, never gone long enough for it to feel like her presence was a comeback and never so eager for fame that you would question her choices. This all aligns with her personal definition of success today.

“Some people might call success a big blockbuster,” she explains. “Others might say it’s getting to work in an art form that you love or getting to play roles that mean something to you and having certain people be touched by those roles. For me, the latter is the safest way to go. If you spend all your time thinking about whether something could make a lot of money, you’re going to be in trouble because very few things do. Unless you’re Dwayne Johnson.”

“If you spend all your time thinking about whether something could make a lot of money, you’re going to be in trouble because very few things do. Unless you’re Dwayne Johnson.”

“It’s a safer bet to focus on a good experience, a good location and a good gang of people you want to work with. Hopefully you learn something from the experience, and maybe some people will love it.”

Her strategy for success has brought her in contact with some powerful men who have been in the news lately—and I’m not talking about The Rock. Maybe every actress has this many interactions with problematic men, but, still, it stands out with Campbell, too. To wit: Harvey Weinstein served as an executive producer for the Scream movies; James Toback directed When Will I Be Loved, including that film’s sex scenes; and Kevin Spacey (obviously) was in a little show called House of Cards. “It’s a lot more than three,” she says, after I repeat this list. “At this point, my agents are like, ‘Can you just let us know everybody you’ve worked with?’ I don’t know why. I feel like the #MeToo hashtag thing is like a Six Degrees of Kevin Bacon for me. It’s ridiculous.”

“I think what I’ve been struggling with is that there hasn’t been much due process for certain people. At the same time, I’m glad that things are shifting.”

And while she doesn’t disclose any sad or salacious stories, it’s a reminder of the dangers of the industry. “It’s a very strange experience,” she says. “It’s just sad that there are people in this world who use their power to dominate others and take advantage and harm. Within all of this, that is the horrible thing. I think what I’ve been struggling with is that there hasn’t been much due process for certain people. At the same time, I’m glad that things are shifting. I’m certainly overjoyed that people are finding their voice and speaking up, and I think anyone who has been damaged shouldn’t hesitate to try to find justice. I’m really glad that that movement is happening. I think we need to be cautious about judging people until we’re absolutely certain. It’s a tough balance. I think it’s OK for the pendulum to swing right now. Maybe people need to be extra-cautious to figure out what’s appropriate and learn how to read signs and just be smart about it.”

Maybe it’s too optimistic to take Campbell’s latest role—as Dwayne Johnson’s wife in Skyscraper—as a sign that the industry is getting better for women. Yes, she is playing a wife in an action movie, but at least she is a wife who is age appropriate for The Rock.

“I actually mentioned that to the producers when we were shooting. I went in for the screen test, and some of the other actresses were 10 years younger. At the time, I thought, ‘This is never gonna happen.’ I was really impressed that they hadn’t looked up my age.”

“I actually mentioned that to the producers when we were shooting,” she says. “I went in for the screen test, and some of the other actresses were 10 years younger. At the time, I thought, ‘This is never gonna happen.’ I was really impressed that they hadn’t looked up my age.”

That might be the lasting contribution of Campbell’s generation of actors. They seem to be leading the charge to change Hollywood’s attitude toward gender equality. Probably, though, the producers just saw Campbell’s inner resolve and realized that only someone as big as The Rock would be a believable match for her.