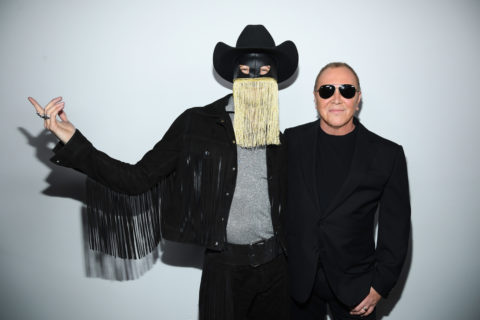 Four tracks from his debut album Pony served as the soundtrack for the show.

Michael Kors’ Fall 2020 collection, which he presented at New York Fashion Week yesterday, was filled with plaid capes, cozy knits, suede riding boots and oversized scarves. In short, there was a strong countryside vibe to it all. It makes sense then, that the brand tapped Canadian country musician Orville Peck to provide the soundtrack for the show.

Dressed in his signature fringed mask and a Michael Kors Collection look comprising a black fringed jacket and trousers, Peck performed four songs from his debut album Pony — “Dead of Night,” “Winds Change,” “Turn to Hate” and “Queen of the Rodeo.” As FASHION noted in a profile on the musician last fall, Peck’s music is “an unforgettable chimera of old-school country, shoegaze and sadboi R&B that goes down as smooth as honey.”

The decidedly urban American Stock Exchange in Manhattan may have served as the venue for the show, but to suit the theme it was transformed to look like a deconstructed country house, with floating wood walls and window frames. The wood used for the set will go on to live another life, when it’s donated to Materials for the Arts, New York’s largest creative reuse centre. Considering the overarching theme of nature and the countryside, some of the clothing in the collection was made with recycled or reclaimed materials and yarns, while others featured responsibly sourced fibres.

“I think we can all relate to feeling a little too plugged in sometimes,” said Kors in a statement. “This collection explores that idea of getting away from it all, of taking some time to escape into nature and refuel. And of course, since we can’t all move to the countryside, we looked at how you can take that feeling of privacy and coziness and imbue it with the polish and luxury you need in an urban environment.”

Photo by Dimitrios Kambouris/Getty Images for Michael Kors
Get the best of FASHION in your inbox Thanks for signing up!
The latest fashion, beauty and celeb news delivered right to your email #FASHIONforall Now, check your inbox to complete your subscription
We won’t ever use your email address for anything else
Want even more FASHION? Follow us on social media.