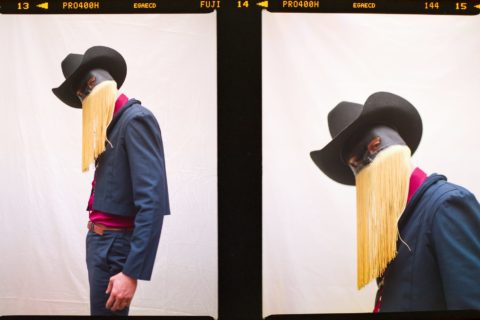 “Every generation falls into this trap where people think apathy is cool: doing the least amount and pretending they don’t care. That has just never appealed to me."

But he’s a young, hot, queer cowboy clad in colourful vintage Western gear and covered in tattoos. Peck’s debut LP, Pony, was instantly acclaimed by all the snobbiest music journos and fashion magazines as an unforgettable chimera of old-school country, shoegaze and sadboi R&B that goes down as smooth as honey. His voice is filled with Roy Orbison longing and Chris Isaak smouldering desire.

But more notably, and always, there’s the mask: a Lone Ranger-esque face covering with a foot of inky fringe. To say it hides Peck’s real identity isn’t entirely correct. It’s true that “Orville Peck”—who these days is based in Toronto—isn’t the singer’s real name, but you get the sense that the masks are an essential part of who he is, onstage and offstage. And while it’s possible to find Peck’s “real” name online—compelling, if unconfirmed, reports point to an erstwhile punk drummer from Vancouver—knowing who is behind the fringe adds nothing to the music. The mystery, the look, the songs: It’s all a piece. Peering out from behind the mask, his huge baby blues shoot you down. Beautiful and unattainable. The eternal conundrum. Somehow, a masked man sings our pain best.

The masks are Peck’s trademark; he owns over 20 now, which is especially impressive considering he sews them himself. “I just started naming them; I haven’t named all of them yet, but it’s fleshing out their personalities a lot more,” he laughs over the phone. “One’s called Cheryl, and one’s called Iris, after my mother and my grandmother, respectively.” All his life, he felt unable to let go of his insecurities while performing—to be truly authentic. Then, he donned a mask. Here, at last, was the key. It was the mask that gave him the confidence to totally open up at the very first Orville Peck show, to sing out his heart’s true secrets. Covering up revealed all. “It has definitely helped me feel a little less exposed but at the same time completely exposed,” he says. “It’s an interesting double-edged sword, because it actually helps me feel confident enough to sing about really, really personal stuff.”

“Patsy Cline also really spoke to me when I was little; her lyrics have a dark, lonely quality to them.”

Peck says he comes from a long, proud line of subversive country artists, like Johnny Cash, Willie Nelson, Merle Haggard—and even Buddy Holly. Growing up, however, he listened to a lot of Western women. “I think, subconsciously, I was probably more connected to their perspective because it was slightly more marginalized,” he says. “Dolly Parton especially—she did everything kind of tongue-in-cheek, making social observations in subtle ways. Patsy Cline also really spoke to me when I was little; her lyrics have a dark, lonely quality to them.”

Peck leaned into the darkness—and camp. Inspired by Porter Wagoner’s rhinestone-studded Nudie suits and the films of David Lynch and John Waters (Female Trouble is his ultimate fave), he created Orville Peck rather than becoming a CMT clone. (Other fashion inspirations include the fringe and leather of 1980s rodeo queens Parton and Reba McEntire and the boot-cut jeans and white T-shirt minimalism of 1990s Garth Brooks and Tim McGraw.) “Every generation falls into this trap where people think apathy is cool: doing the least amount and pretending they don’t care. That has just never appealed to me,” he says. “A lot of people question my sincerity and my art because I put a lot of effort into the visuals and the story. But those are the things I’ve always admired in artists. I could go onstage in jeans and a T-shirt and just, like, sing about nothing, but when somebody tries a bit harder, people seem to respond to it really well, which is great.”

And from that effort, Peck has been selling out shows across North America months in advance, including two nights in Los Angeles, where he’s running a drag rodeo. (He yearns to incorporate live ponies trotting around the stage or, perhaps, pipe in a signature scent. What would it smell like? “A barn.”)

“What’s really lovely is that maybe what I’m doing allows some of those people to know it’s OK. You don’t have to stand on the outskirts and enjoy this from afar; you can be a part of this. You are, already, a part of this.”

Such commitment and soulfulness attracts a motley group of admirers, including, Peck says, Middle America dads who sing Peck’s super-gay tunes en famille in the car on the way to school. He draws fans from many tribes: Americana, pop, goth country, new wave. (He even has stans already: PeckHeads.) His unabashed queerness—in “Big Sky,” for example, he sings about romancing boxers and jailers—also welcomes LGBTQ country lovers back into the fold, he says, remembering the gay man (descended from a long line of rodeo clowns) who told Peck that thanks to Peck’s unique brand, he finally felt able to embrace his country roots. “Before, we weren’t allowed to have a voice,” he says. “What’s really lovely is that maybe what I’m doing allows some of those people to know it’s OK. You don’t have to stand on the outskirts and enjoy this from afar; you can be a part of this. You are, already, a part of this.”

Peck is, it turns out, a true millennial cowboy. He has experienced some catharsis from his success, yes, but he still feels…unmoored, or incomplete, somehow. “That’s part of what Pony is about, too: It’s coming to terms with the fact that I’ll always feel a bit unsettled, and I probably will always have anxiety, and I probably will always feel a bit lonely,” he says. “The lovely thing is noticing that other people connect with that as well. Rather than that curing the problem, it just helps me understand that stuff doesn’t need to be negative.”

That is, after all, the cowboy way. According to Peck, being a cowboy has nothing to do with having a horse or wearing a cowboy hat. It’s being able to keep your head high, despite the solitude, despite being an outsider. “It’s finding the power in yourself and being able to ride on your own,” he says. And so Peck rides, singing for himself, singing for us all. Not all heroes wear capes. But some wear masks.