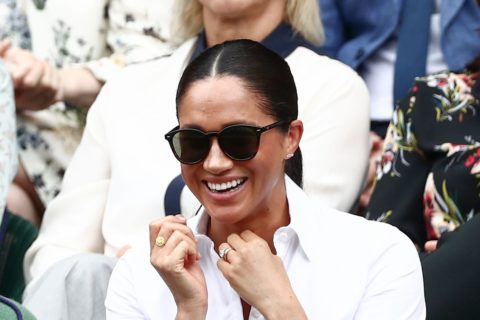 In the words of the Spice Girls, friendship never ends

Yesterday, Buckingham Palace announced that the Duchess of Sussex’s first official event post-maternity leave is scheduled for next week. However we’ll get to see Meghan before then as she’ll sit in the stands to support best friend Serena Williams in the US Open final tomorrow.

Meghan was spotted boarding a commercial flight (which will hopefully encourage the media to back off her travel choices following the recent private jet turmoil) to New York this morning. Prince Harry was not seen with her and it is unknown at this time whether Archie will accompany her. It is believed Meghan will return to the UK on Sunday after the match to prepare for her fashion line launch and upcoming royal tour to South Africa.

Meghan has been a firm fixture courtside at some of Serena’s biggest matches, including Wimbledon in both 2018 and 2019. The pair first met in 2014 and Serena threw Meghan’s NYC baby shower with Jessica Mulroney earlier this year.

It’s set to be a nail-biting match tomorrow as Serena looks to secure her 24th grand slam singles title (to equal Australian player Margaret Court) and 19-year-old Andreescu wanting to finish her dream run at her first US Open tournament with a win against the champ. The pair last faced off against one another at this year’s Rogers Cup with Andreescu winning the match after Williams retired due to injury. In her post-match interview after defeating Swiss player Belinda Bencic last night, the Toronto native said, “”It’s just surreal. I really don’t know what to say. It’s a dream come true playing against Serena in the final of the US Open. It’s crazy.”

As for other fashion industry faces, Anna Wintour will certainly be present and it’s possible that Gigi Hadid will make an appearance to support Williams as she has done in previous years.

The moral of the story? Make sure you have nothing on at 4pm tomorrow.

Photo by James Marsh/BPI/Shutterstock
Get the best of FASHION in your inbox Thanks for signing up!
The latest fashion, beauty and celeb news delivered right to your email #FASHIONforall Now, check your inbox to complete your subscription
We won’t ever use your email address for anything else
Want even more FASHION? Follow us on social media.