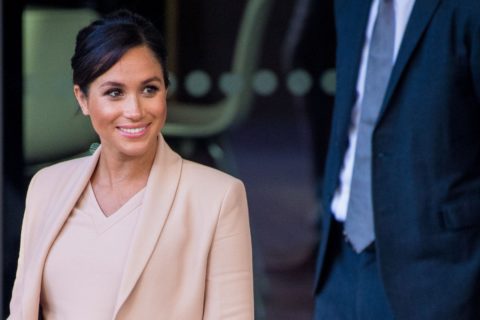 The launch will mark Meghan's official return from maternity leave after four months.

It’s hard to believe that Duchess of Sussex has been on maternity for the past four months. Since welcoming baby Archie, Meghan has still been a fixture at key royal events like Trooping The Colour, as well as The Lion King premiere, Wimbledon (to see her friend Serena Williams play) and a baseball game in the UK. However the Duchess is making her *official* return to work next week, it has been confirmed today.

On September 12, Meghan will attend an event for one of her patronages, Smart Works, at which she will make a speech, attend a panel and learn more about what the charity offers to women returning to the workforce. The event coincides with the launch of Meghan’s capsule collection she designed in partnership with Misha Nonoo, Marks & Spencer, Jigsaw and John Lewis for the charity.

According to royal correspondent Omid Scobie, the collection “will be sold on a one-for-one basis” and includes “a shirt, trousers, blazer, dress and bag.” Furthermore, it will reportedly be available for two weeks giving shoppers plenty of opportunities to help support the charity and its important work.

Meghan recently shared a behind-the-scenes peek at the line via the Sussex Royal Instagram account, however there have been no official photos of the line shared as yet.

In the September issue of British Vogue, the Duchess wrote of the charity, “There is often a misunderstanding about Smart Works being a makeover, a fashion show of ‘before and after,’ where a woman is magically transformed into something better than she was before. But to label it as such would not only be inaccurate, it would be missing the point. This is not a fairy tale. In fact, if it’s a cultural reference you’re after, forget Cinderella – this is the story of Wonder Woman, ready to take on the world in her metaphorical and literal cape.”

The engagement comes ahead of the Sussex’s first royal tour as a family of three to South Africa from September 23.

Photo by Shutterstock
Get the best of FASHION in your inbox Thanks for signing up!
The latest fashion, beauty and celeb news delivered right to your email #FASHIONforall Now, check your inbox to complete your subscription
We won’t ever use your email address for anything else
Want even more FASHION? Follow us on social media.