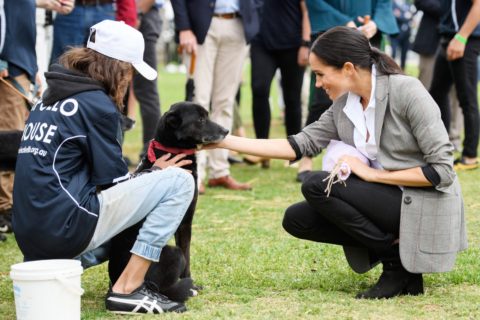 What Does the Meghan Markle Effect Really Mean?

Everything Meghan Markle wears constitutes its own news cycle, and each component of an outfit is treated as its own worthy story, so it’s no surprise that the Duchess’ denim choices ignited a media frenzy. But what exactly happens to a brand once the most visible woman in the world decides to don your stuff? A lot, it turns out.

Thanks to the Duchess of Sussex, Outland Denim, which employs women who have been the victims of sex trafficking to work as seamstresses in their factory in Cambodia, has been able to hire 30 more workers to help out with increased production demands. “It is quite remarkable to think The Duchess of Sussex’s influence means more jobs almost immediately,” said the brand’s founder, James Bartle. “This means women will be able to earn a living wage, provide for their children in terms of nutrition, care and education, and will gain new skills and confidence in a positive workplace environment.”

For more on what happens when Meghan Markle wears your stuff, we caught up with Lauren Purkis, a business partner in Outland Denim, to gauge how Meghan’s recent endorsement of the humanitarian denim brand has affected business.

We cannot think of a more suitable woman to carry the Outland Denim brand. A big thank you to the Duchess of Sussex (and bump!) for choosing to wear Outland Denim on this #royaltour! Meghan wears the high-rise Harriet jean in Black. #madedifferent #zeroexploitation #GameOnDownUnder #IG2018 #DukeandDuchessofSussex ? Samir Hussein & Getty Images

Did you know that Meghan Markle would be wearing your jeans before she stepped out in public wearing them?

As an Australian brand, there was an opportunity to bring forth product, so we knew that our product was potentially in her hands, we just didn’t know if it was going to be featured. As soon as we saw her walk off the plane [in Sydney] we thought her jeans looked like ours, and within twenty minutes it was confirmed though information from a photo credit.

How exactly does it work? Does a Royal Stylist reach out and request items from the brand?

I guess there was some Royal Protocol, [the jeans] were sent forth and there was really no follow up on their end. We knew the product has been presented [to Meghan] because we were told the jeans were “well-received.” But this was before she announced her pregnancy. We didn’t think denim would be on her list because we didn’t know how far along she was. Then we saw the picture of her and realized they were ours. We knew they were comfortable, but we didn’t think she would be continuing to wear denim.

What has happened since it was confirmed the Duchess was wearing Outland?

We had a prepared press release in the event it happened, so we sent that out to our teams, and from there we just watched the Markle effect happen. Our number of Instagram followers doubled within 10 hours. Our website traffic increased by 1000%. In Australia, there was a sale placed on the website every 45 seconds. The Harriet jeans are sold out there. In North America, sales were up twenty times online. There was just a phenomenal surge of interest.

What does the Duchess’ support mean for the company?

We provide opportunity for women who have been exploited by sex trafficking. For us to be able to sell more jeans means we’ll be able to employ more people, which gives us an even bigger platform to provide exploitation victims with the opportunity to pull themselves out of poverty, which is massive. It’s great to be able to say, ‘we sold X number of jeans’ but the bigger picture for us is to be able to grow exponentially. We’re going to be able to help drive a larger force of employees and continue to do what our mission is, which is to combat human trafficking. It’s really such an honour to have someone like the Duchess step out and give awareness to a brand like Outland.

Was the only pair that sold out the Harriet jean in black, which she was wearing? Or did all the styles sell out?

The Harriet in the black did sell out in Australia. We still have some available in the blue. What we are seeing is people buying multiples. They’ll buy the Harriets and then pick up the Lucy or one of our other styles. Overall it’s been unbelievable exposure. It’s gone from people barely knowing what Outland is to having people walk into retailers and ask for us. Alexandra Weston at Holt Renfrew has said that people were asking the employees, “Do you guys have the denim [Meghan] was wearing?” It’s been great.

How will this affect Outland’s future in the long run?

Being a new brand in a very saturated market like denim, the biggest thing is brand exposure and getting people to understand our story, which is quite complex. To have someone like the Duchess wear [Outland], it amplified our story in a way we never could have done overnight.