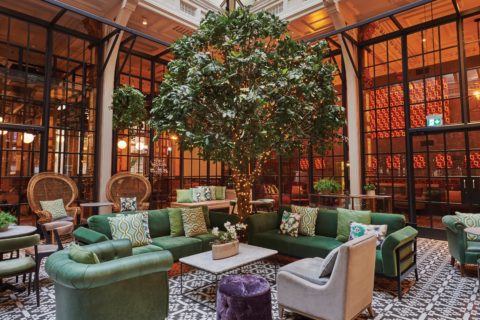 We Think Manchester Is the U.K.’s Most Underrated City

The symbol of Manchester is the worker bee, chosen during the Industrial Revolution because of its reputation for being a productive member of the hive. The bee’s humble role belies its surprising talents, like the “waggle dance,” a form of communication bees use to let their colony know where the best flowers are located, never mind its ability to pollinate our food supply. It’s this low-key savoir faire that embodies the true spirit of Manchester. A northern city that blossomed in the 1800s as a manufacturing and economic powerhouse, today, Manchester has reinvented itself as an unpretentious destination for exploring authentic local food, culture and architecture.

Manchester has long been a hub of creativity—it’s the birthplace of several genre-defining musical groups like The Smiths, Joy Division, The Chemical Brothers and Oasis. The city’s relative distance from London has allowed it to develop on its own terms and without any of the frantic overcrowding that plagues major urban centres. At Tariff & Dale, you’ll find a menu of modern British cuisine that includes numerous takes on the sausage roll and, of course, fish and chips.

During my visit, I stayed at The Principal Manchester hotel, a regal Victorian terra cotta labyrinth built in 1890. It was originally home to The Refuge Assurance Company, which is what inspired the name of the ground-floor eatery, The Refuge. Offering a quiet place for a breakfast of bangers, beans and Bury black pudding and a serene Winter Garden room for afternoon tea, it transforms into a buzzy resto lounge after dark that’s popular with locals and visiting celebrities alike. (Whispers of Adrien Brody sightings ran rampant while I was there, and I had breakfast next to American rapper El-P, who was in town for a music festival.)

The perfect spot to start the day with a paper and strong cup of tea. #manchester #manchestergram

Another repurposed gem is the Gotham, a luxe art deco hotel housed in the former premises of Midland Bank. At its Honey Restaurant on the sixth floor, the guinea fowl-leg terrine with root-vegetable crisps is second only to the view. After dinner, climb the artsy industrial staircase to Club Brass, a members-only lounge where you can cozy up on a secluded sofa away from prying eyes.

All eyes in Manchester, however, are on its art. The city is home to many beautiful exhibition spaces, including the Manchester Art Gallery, which also operates the Gallery of Costume at Platt Hall, and The Whitworth. The latter includes a collection of some 20,000 textiles from around the world. Rain or shine, strolling around the Northern Quarter is like visiting an open-air gallery. Famed for its impressive street art, the neighbourhood boasts massive colourful murals of birds, bees and song lyrics that make for fab selfie backdrops. They also give a whole new meaning to the song “Wonder Wall” by ’90s Manchester darlings Oasis.