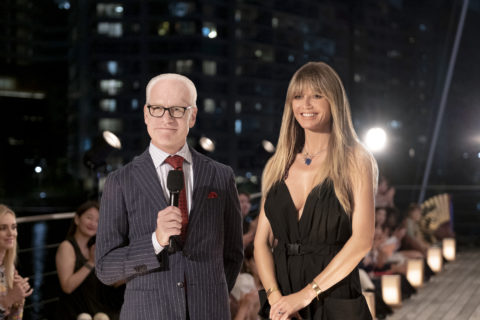 Their Amazon Prime Video show, Making the Cut, will announce its winning designer this Friday.

If you’d told me over a decade ago when I started my love affair with Tim Gunn and Heidi Klum that one day I’d be interviewing them while wearing sweatpants, I wouldn’t have believed you. Yet that was how my (mercifully audio only) Zoom call with the Making the Cut co-creators and presenters went down. I was relieved that Klum admitted she’s also been keeping it casual while in quarantine. “I’m not sure my feet will ever be able to get into heels after being in Birkenstocks for all this time,” she laughed, to which Gunn emphatically responded, “They will!”

Chatting with the duo is much like watching them on the show—like listening to two friends mull over the state of fashion today in the most optimistic way. When asked what it was like conceptualizing a reality show for a 2020 audience, Gunn began by saying, “Heidi, a word you’ve used frequently is ‘relevance’. We wanted to show a fashion competition that was relevant to today, and that’s really about branding. Yeah, you want the dress to be pretty but the conversation has to go beyond that.”

Did you love the winning looks this week?! Drop your @amazonfashion faves below ? and don’t miss more limited edition winning looks coming this Friday!

Making the Cut’s mandate is to find the next designer with enough vision and business acumen to head up a global fashion brand; someone who could not only contribute exciting designs to the saturated fashion landscape, but also helm a viable company. Drawing from a pool of people who already had existing labels, Klum and Gunn needed to ensure the contestants were poised to take on such responsibility—creatives who also spoke to today’s truly global industry. “We really tried to pick people from around the world and not exclude anyone, so [we chose] someone like Sabato who’s a little bit older and someone like Sander who’s super young,” says Klum. The show’s inclusivity doesn’t end there; gender neutral and diverse model casting has featured within each episode’s catwalk competitions, too.

24-year-old Belgian designer Sander Bos is still a contender for the show’s prize of $1,000,000 as well an Amazon Fashion mentorship opportunity, and the chance to create a collection to be sold on the platform (winning designs from each episode’s challenges have already been added to Amazon, some selling out in hours). “The stakes were too high to have an unknown quantity to deal with,” says Gunn. “We interrogated them enough—and I use that word seriously—to get at the core of what they’re about and what they want to achieve.”

Our designers serving streetstyle realness in the beautiful city of Tokyo! ?

Yet it’s not just the designers who are getting a hyper-speed course in what it takes to be a successful designer today. Gunn adds that the audience has the opportunity to get a glimpse of what our current—and future—fashion industry looks like. “I hope that they cease looking at fashion as being all about sewing,” he says. “There’s a larger rubric of components that are so critical to being successful.”

“I also think it’s nice for people to understand when they have something on, how much thought went into it, and the process of that designer creating it—the whole journey it went on until it arrives at your home,” says Klum. “It really shows them the A to Z.”

Highlighting this kind of insight during each show has meant tasking the designers with creating both runway and accessible looks, and in one episode, asking them to embark on collaborations with fellow competitors. They then each had to take leftover fabric from that challenge to create new pieces—something more designers in the industry are becoming mindful of when approaching their collections.

Can’t get enough of this crew ? Are you caught up on this week’s new episodes? @amazonprimevideo x @amazonfashion

It’s a concept that would confront any designer with tapping deeply into their creative side, and it’s the kind of ingenuity that Klum and Gunn think is still much needed in the fashion world. “Designers need to keep making this poetry that we can fall in love with,” Klum says. “There needs to be every day stuff, and there needs to be some special pieces that keep us dreaming.”

After all, it’s dreams that keep us all going—even Gunn and Klum themselves. “You know, Making the Cut was a dream for us that came true,” says Gunn. And that’s precisely what they and the show’s judges will do for one lucky designer come Friday.

Imagery courtesy of Amazon Prime.
Get the best of FASHION in your inbox Thanks for signing up!
The latest fashion, beauty and celeb news delivered right to your email #FASHIONforall Now, check your inbox to complete your subscription
We won’t ever use your email address for anything else
Want even more FASHION? Follow us on social media.