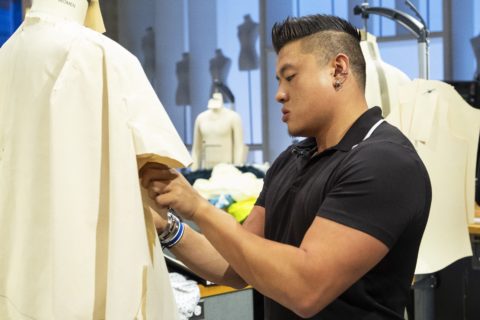 "I really want to respect people and what they desire in clothing."

“CAFA just followed me on Instagram!” Charles Lu excitedly tells me as we sit down to chat during last night’s Next In Fashion party in New York. He’s here tonight, along with the 17 other contestants from Netflix’s hit new fashion competition show. In 10 episodes, the show shone a light on the design talent of each of the contestants, Charles included, and it’s evident that each of them is savouring the moment and all it’s bringing with it.

During his time on the show, Charles served up a variety of cool, wearable looks that we could see the street style set living in. Not only that, the Hamilton-born designer also spoke about his passion for creating extended size clothing, and hinted that his own label was in the works.

Last night, we spoke about this and more. Catch the highlights below:

“When I was doing evening dresses, I couldn’t really personally connect with it. How many people wear dresses? And how many people wear $20,000+ dresses? So when that challenge came up and I really linked what I knew about couture and evening and fused that with streetwear, I was like, that is the brand. That is where I should be heading. I have my very own personal style with how I dress and [previously] I haven’t known how to mix that with the fashion I design. In that challenge, it fully married with each other. There was this really clear moment where I thought, I love this, this is so me, why haven’t I done this before?”

Since leaving the show, he’s been approached by other brands to design but he’s focused on starting his own thing

“There have been offers from other companies but I just know it’s going to be a repeat of history. I just think it’s really time that it’s my own. I have enough experience and I just think it’s a waste to not fully express my vision because it’s so strong and it’s so clear, and it’s really what I believe in.”

“The response has been so overwhelmingly positive. During the lingerie competition, people were reaching out to me, people of extended sizes, women who are body builders, people with depression, and I resonated with so many people. It was a level of responsibility that I didn’t think would come from the show. I want to respect it, because these people need something and it’s our job as designers to deliver it.”

“My sisters were the first people to say that they wanted something from me. One of my sisters is a D-cup, she’s a size 8 so at a very young age I had to figure out proportion. I was never afraid coming into this competition because I was like, I know what they need. We need to have this conversation in fashion – there has to be this level of inclusivity. The conversations I’ve had with my sisters, I’ve asked them, what do you hate in dresses? And they’ve told me that they don’t want to wear a bra with their dresses all the time. They want to zip up and walk out the door and feel secure. They want to feel beautiful. And that’s the one thing that women can universally agree on. No one wants to walk out the door with a question mark.”

Right now, he is looking for an investor to help realize his brand’s full potential

“I really want to hold out for an investor that can fully commit to [me having extended sizing as part of my collection]. I want to be able to deliver pieces that are not only flattering for runway models but can be translated in different ways and different proportions. Moving forward, I really want to respect people and what they desire in clothing.”

“It tests you. I was very limited with what I could use when I was a kid. When you start smashing pop cans to make a dress, you can figure sh*t out real quick. So I was used to using not just unconventional materials, but finding beauty in the everyday. If the challenge was to go into a bin and find recycled materials, I’d be fine with that. There’s beauty in everything.”

Canada will always hold a special place in his heart

“As you get older, you embrace your past and make it a part of who you are in the future. That’s when the best design comes out. If [my brand] is based in Canada, or elsewhere, I’m still a Canadian designer, and I want it to be international regardless.”

“What would hurt me the most if is someone went on my website or went looking at my pieces and they said, I can’t relate to that. That moment [when a customer] clicks [with a piece] and they feel so beautiful, that’s the most rewarding moment. That’s when I feel like I’ve done my job. So I don’t take that lightly, ever.”

Photograph by Lara Solanki/Netflix
Get the best of FASHION in your inbox Thanks for signing up!
The latest fashion, beauty and celeb news delivered right to your email #FASHIONforall Now, check your inbox to complete your subscription
We won’t ever use your email address for anything else
Want even more FASHION? Follow us on social media.