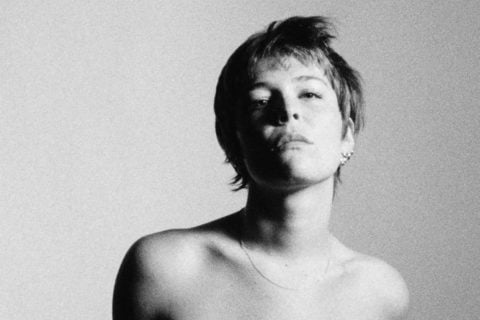 The singer sheds what no longer serves her in her new album.

A few weeks before the release of her second studio album, Maggie Rogers is still grappling with its title. Surrender, out July 29, is an ode to giving in, breaking free and finding joy amid chaos. But on our video call in late June, Rogers is quick to state that she doesn’t yet have all of the above figured out. When I ask what freedom means to her, her response is understandably unclear. “I think that if I knew that, I would probably be out of business,” she quips. Even still, her new 12-song project gets pretty close. With the overwhelming state of the world, listening to the pop indie record feels like a liberating antidote to apathy.

For the singer-songwriter, few things bring about this emotional release like cutting her hair. “It’s like the most essential me,” she says of the short strands peeking under a blue paisley bandana. “Because you can’t hide.” Surrender is another vessel for Rogers’s vulnerability.

In 2016, the musician (then a senior in college) skyrocketed to stardom after a video of Pharrell Williams listening to her song “Alaska” went viral. The cover art for her subsequent debut studio album, Heard It In A Past Life, showed Maggie Rogers with chest-length tresses blowing in the wind. The project was her way to “set the narrative straight” on her sudden fame. But when making Surrender, Rogers (now a Harvard University master’s graduate) didn’t feel bound by any public expectations. And this time, she appears on the cover with a face-framing pixie cut.

Maggie Rogers has always gravitated towards this type of physical transformation. “I have cut my hair super short every four years for most of my life,” she notes. “I used to do it myself when I was a kid. It was always a problem that I would find scissors and try and cut my hair.” Come September 2020, she chopped off her locks in true quarantine fashion: with a pair of kitchen scissors in her backyard.

“Every time I get a haircut, I feel a sense of rebirth — no matter whether it’s short or long,” she explains. “There’s something about that freshness, that pruning. Hair cuts are super spiritual, and you get to remove parts of you that you’ve been carrying for a long time.”

Relinquishing what doesn’t serve you is a defining theme of Surrender. With its stream-of-consciousness subject matter comprising friendship, anxiety and running away, the album is a result of Rogers making music to pass the time, not to meet deadlines. “It felt like a pure artist thing,” she says of working on the album, which she began in 2020 while staying at her parents’ house. “It’s about making art when no one’s looking and making art when it’s not for your job. You’re not thinking about anyone hearing it.”

After channelling all her feelings over the past few years into the project, Rogers says she was surprised by its undercurrent of what she calls “feral joy.” “It’s a joy that comes from your teeth. It’s a joy that’s hard-earned,” she says.

The album is not just a soundtrack, it’s like a home you can go live inside. “I love the world-building aspect of making a record,” Rogers says, noting the font, colours and clothing featured in the visuals for Surrender have been selected with mindful precision. The result? A kaleidoscopic colour palette of purple, green, black, orange-y tangerine and dusty yellow. “I showed my friend the mood board and she said, ‘That looks like a bruise,’” Rogers laughs.

Clothing has played a big role in crafting Maggie Rogers’s new music era. Usually, she knows what she likes. “I wear one outfit pretty consistently,” she says of her tried and true uniform: a pair of Levi’s 501s, a white t-shirt or tank top, a black suit jacket and a pair of steel-toed Calvin Klein boots. “But I’m having fun mixing it up right now and experimenting.”

Lately, Rogers has been flirting with a sundry of style influences, from French fashion to nautical stripes to Victorian ruffle shirts. “Getting dressed feels like inviting the divine feminine or the creative voice into my every day. And that is how I feel the most like an artist, in getting to express myself in that way.” Citing her love for androgyny as one of the driving forces behind her self-expression, Rogers is inspired by iconic short-hair references like noughties Agyness Deyn ads and ‘60s Twiggy looks.

But it’s been a journey to get her hair just right. “When I look at photos [of myself] while making this record, I’m so clearly in the middle of a transformation emotionally,” she says. “So at this moment, with the record coming out and my hair finally feeling like it looks good, it’s like a crystallization that’s happening.”

Just like her connection to hair, Maggie Rogers has an ever-evolving relationship with the concept of surrendering. “To me, it is so deeply empowering and something I struggle with. It’s something I’m still actively thinking about on daily basis,” she says. As a listener, Surrender doesn’t claim to have the answers to your emotions, it just welcomes you to find power in them. For Rogers, that means feeling joy as a form of resistance, dressing solely for herself and finding freedom in a haircut.

“[Hair] is actually old parts of you. It’s been with you. It takes on things,” she says. “What’s so crazy is that right now, as I’m in the midst of this really rapid transformation of coming out of grad school [and] coming into release week… I also have to get my hair cut every three to five weeks because it’s super short. That, to me, feels like a symbol of constant regeneration.”