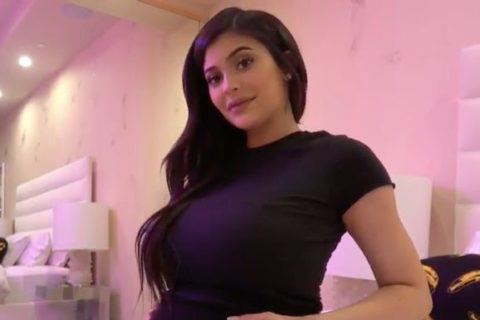 Following in the legacy of “unique” Kardashian baby names, Kylie took to social media to reveal the name of her new baby girl. In a sweet Instagram post — featuring a millennial pink aesthetic and Kylie’s perfectly manicured nails, of course — the youngest Kardashian/Jenner sister shared the first photo of her child with Travis Scott.

“Stormi ??,” she captioned the photo. Since the birth of the baby was announced on Sunday, fans have widely speculated the name of the newborn. Many thought that the couple had named their daughter Butterfly, after picking up on a series of hints in their “To Our Daughter” YouTube video (which, BTW, has 37 million views after just two days.) Not only are there butterflies in the baby’s nursery, but Kylie, 20, and Travis, 25, have matching butterfly tattoos. He also has a song called Butterfly Effect.

We’re not, however, totally sure why the couple chose the name Stormi. Behind The Name suggests ‘Stormi’ is an alternative spelling of the Greenlandic ‘Storme,’ or the English ‘Stormy’—which are each derived from the Old English word, ‘storm,’ and the Old Norse origin, ‘Stormr.’ Merriam-Webster defines the word, ‘storm,’ as “a disturbance of the atmosphere marked by wind and usually by rain, snow, hail, sleet, or thunder and lightning,” or “a serious disturbance of any element of nature.”

Whatever the reason, we’ll just say this: we’re glad the ‘Butterfly’ rumours were wrong.