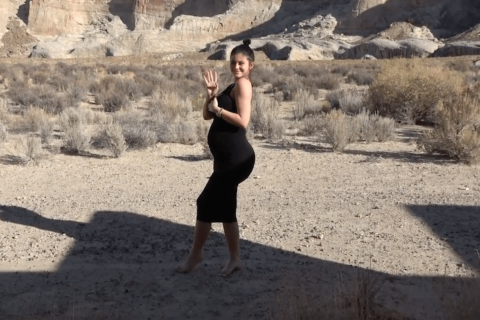 The 20-year-old took to Instagram to confirm the birth of her daughter.

This is not a joke. After several months of speculation, Kylie Jenner has finally confirmed she has given birth to a baby girl.

“I’m sorry for keeping you in the dark through all the assumptions,” the youngest Jenner shared in an Instagram post on Sunday. “My pregnancy was one I chose not to do in front of the world.” The 20-year-old reality TV star then revealed she and boyfriend Travis Scott welcomed a baby girl on February 1.

Jenner also posted an Instagram video of BFF Jordyn Woods, ostensibly filmed prior to giving birth. The teaser shows Woods imparting touching words to the unborn baby. “Whatever your name is going to be, this is how I found out about you.”

thank you @wttyler for putting this together. here’s a little glimpse of the last 9 months. the link is in my bio ♥️

The clip is one of many that were featured in an 11-minute long compilation video chronicling Jenner’s 9-month journey. The complete video, titled “To Our Daughter” was uploaded to her official YouTube channel on Sunday afternoon.

The video starts off with archival footage of KarJenner matriarch Kris, pregnant with Kylie and laying on a hospital bed in August 1997. The video then documents Kylie’s own pregnancy, featuring clips of her attending ultrasound appointments, spending time with family, celebrating with friends at her baby shower, and (hands-down our fave) pulling up at fast food drive-thru contemplating whether or not she should get regular fries or cheesy fries. (Order the cheesy fries, Kylie!)

The compilation, in all of its faux VHS-y glory, is straight-up heartwarming. (I can’t lie, I teared up–CAN I LIVE?!) The Kardashian-Jenners, the reality TV family people love to hate, have a long-standing history involving scandals and controversies. The family has been accused numerous times (too many to count, TBH) for plagiarism, cultural appropriation, and a lack of transparency (re: #TB to when Kylie continuously denied getting lip fillers). That said, the fact that the family were able to keep the pregnancy under wraps (AND FOR THAT LONG!) blows our minds. Also, props to Kylie for choosing to stay out of the spotlight in order to focus on preparing herself for motherhood.

“Pregnancy has been the most beautiful, empowering, and life changing experience I’ve had in my entire life and I’m actually going to miss it,” she wrote in her Instagram post. “I’ve never felt love and happiness like this [sic] i [sic] could burst!”

Congratulations to the new parents!