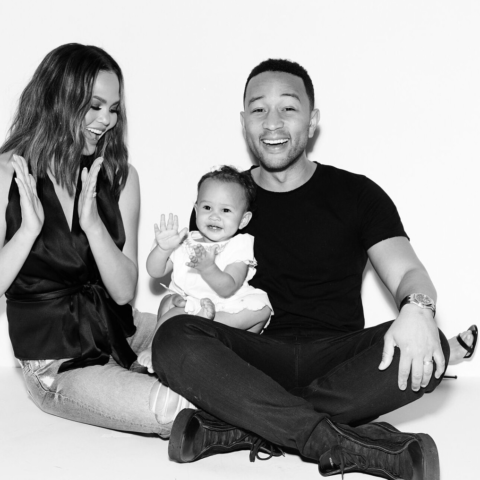 Back in March, Chrissy Teigen penned a powerful essay for Glamour magazine on her struggle with postpartum depression and anxiety.

The 31-year-old model and mother to one-year-old Luna Stephens described the battle as “painful,” revealing she struggled for months before seeking help from a doctor.

Now, Teigen’s husband, John Legend, who was named one of Time magazine’s most influential people of 2017, is speaking out on his wife’s op-ed in a video interview with the publication.

“My wife just wrote very candidly about what she went through with postpartum depression and dealing with the aftermath of having a child,” the 38-year-old R&B singer said. “We’re very happy in our relationship and very happy to be parents, but, like everybody, we’re human and we have challenges.”

“No one should think that our lives are perfect,” he added.

The La La Land star also noted that he and Chrissy love sharing photos of Luna, just like other new moms and dads.

“We’re like other parents. We’re excited to post pictures of our babies,” he said. “We’re just being as natural as we can be in a kind of surreal world.”

Happy first birthday Lu!!!! My lovebug. You are all the best parts of the both of us and I cannot believe how much has happened in you first 12 months of life. We love you to the luna and back. Thank you @Yopeteryang for taking these awesome photos and the lip sync battle team for such a nice surprise!!! ❤️❤️❤️

Chrissy previously described her husband “exactly as compassionate, patient, loving, and understanding as he seems.”

“John has been incredible over the last nine months, bringing me my medicine and watching horrible reality TV with me,” she wrote in her Glamour essay. “He is not the goofiest guy, but he has gone out of his way to indulge my sense of humour.

“I know he must look over at times and think: My God, get it together. But he has never made me feel that way. He wants me to be happy, silly, and energetic again, but he’s not making me feel bad when I’m not in that place.”

Photography via Instagram/chrissyteigen
Get the best of FASHION in your inbox Thanks for signing up!
The latest fashion, beauty and celeb news delivered right to your email #FASHIONforall Now, check your inbox to complete your subscription
We won’t ever use your email address for anything else
Want even more FASHION? Follow us on social media.