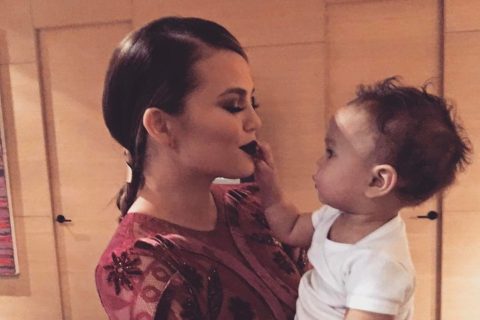 Chrissy Teigen is known for speaking her mind on social media, but in her cover story for Glamour magazine, she gets more personal than ever about something she had been hiding from the public: her struggle with postpartum depression.

Despite the fact that Teigen’s life was full of “happy” things, she was left feeling the opposite. In the article, she wrote: “…I was different than before. Getting out of bed to get to set on time was painful. My lower back throbbed; my ­shoulders—even my wrists—hurt. I didn’t have an appetite. I would go two days without a bite of food, and you know how big of a deal food is for me. One thing that really got me was just how short I was with people.”

Postpartum depression (PPD) is more common than you might think. According to the National Institute of Mental Health, PPD affects 15 per cent of new mothers and commonly starts anywhere from a week to a month after the baby’s birth (though it can begin anytime in the first year postpartum). The NIMH lists the following as some symptoms of PPD: feeling sad/hopeless/empty/overwhelmed, crying more than usual or for no reason, worrying and/or feeling anxious, experiencing anger or rage, feeling physical aches and pains, having difficulty bonding with the baby and doubting one’s ability to care for the baby.

Teigen goes on to explain how dark her days had become: She wouldn’t leave the house for days on end, slept on the couch and would even keep clothing downstairs in the pantry so she didn’t have to go upstairs to change. “Before, when I entered a room I had a presence: head high, shoulders back, big smile,” she wrote. “Suddenly I had become this person whose shoulders would cower underneath her chin. I would keep my hands on my belly and try to make myself as small as possible.”

Though she had trouble identifying what she was going through, a trip to her GP finally got her the diagnosis she was seeking. “John sat next to me. I looked at my doctor, and my eyes welled up because I was so tired of being in pain. Of sleeping on the couch. Of waking up throughout the night. Of throwing up. Of taking things out on the wrong people. Of not enjoying life. Of not seeing my friends. Of not having the energy to take my baby for a stroll. My doctor pulled out a book and started listing symptoms. And I was like, “Yep, yep, yep.” I got my diagnosis: postpartum depression and anxiety. (The anxiety explains some of my physical symptoms.)”

The cookbook author says she’s speaking up so people know they’re not alone. “…postpartum does not discriminate. I couldn’t control it. And that’s part of the reason it took me so long to speak up: I felt selfish, icky, and weird saying aloud that I’m struggling. Sometimes I still do…. I know I might sound like a whiny, entitled girl. Plenty of people around the world in my situation have no help, no family, no access to medical care. I can’t imagine not being able to go to the doctors that I need. It’s hurtful to me to know that we have a president who wants to rip health care away from women,” she wrote in Glamour.

Teigen is getting treatment for her PPD and is on her way to recovery she says. What she writes is so true: Mental illness does not discriminate.

To learn about another writer’s struggle with PPD and addiction, click here.