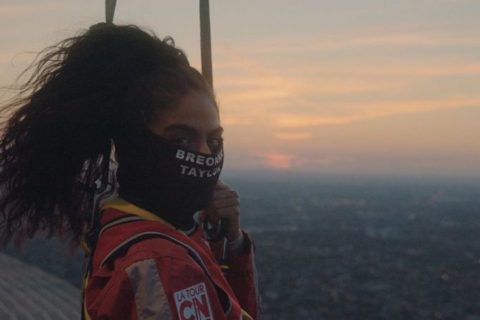 And if the historic performance wasn't enough, the singer made a bold political statement as well.

Yesterday, Jessie Reyez made history by becoming the first artist to perform a national anthem atop Toronto’s tallest building, the CN Tower. At sunset, ahead of the first game of the NBA playoffs—the Toronto Raptors vs the Brooklyn Nets–the Brampton native sang both the Canadian and American national anthems from her perch 116 storeys above the ground.

Safely harnessed and outfitted in a red CN Tower jumpsuit, the Colombian-Canadian singer performed the two anthems back to back from the 5ft-wide ledge that wraps around the tower’s main pod. The 1,168ft-high ledge is open to visitors interested in walking around the tower hands-free as part of its EdgeWalk attraction, the world’s highest full-circle, hands-free walk.

And if the historic performance wasn’t enough, the Juno-winning and Grammy-nominated artist made a political statement as well. The performance opened with her pulling down a black neck gaiter emblazoned with Breonna Taylor’s name, joining the voices around the world demanding justice for Taylor, who was killed in her home by Louisville, Kentucky police officers. As the camera pulled out from Reyez’s face, it became clear that she would be taking a knee through her performance of the two national anthems, another powerful statement.

Watch the full performance of the Canadian national anthem by Jessie Reyez below:

Photo by Adrian Vieni / Mad Ruk Entertainment
Get the best of FASHION in your inbox Thanks for signing up!
The latest fashion, beauty and celeb news delivered right to your email #FASHIONforall Now, check your inbox to complete your subscription
We won’t ever use your email address for anything else
Want even more FASHION? Follow us on social media.