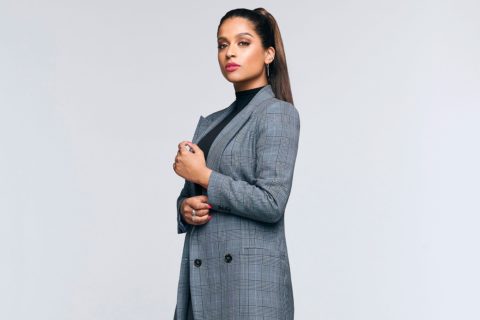 From Lilly Singh to Tanisha Scott, we're highlighting the Canadian women who are having a moment right now.

Of all the YouTube stars who rule over gamers, Gen Z tweens and young millennials, Lilly Singh, who hails from Scarborough, Ont., is probably the most compelling and the most deserving of mainstream success. Singh—previously known as her screen name iiSuperwomanii—used her YouTube comedy channel, where she lovingly skewered her immigrant parents, along with contemporary life, to launch a small media empire that includes world tours, film roles, endorsements and now her own late-night talk show. A Little Late with Lilly Singh will be replacing Carson Daly’s show this fall, making Singh the only woman of colour to own real estate on late-night network TV. —Greg Hudson

Loved this sparkly look from a recent episode of #LateWithLilly. After I wore a sparkly sweater and sparkly purple lip, I got a lot of comments from people saying they could never pull this off and I’m here to tell you, you can pull anything off. So much of this show is out of my comfort zone, including some of the styles I wear. But anything gets pulled off when you wear a layer of confidence underneath it all. So hi, friendly reminder that you’re fabulous baby. Wear what you love. Wear what makes you thrive. Have fun. You can def pull it off ❤️ ?: @wanderlust.sam

You may not recognize her name right off the bat, but you’ve definitely seen her work. Tanisha Scott is the force behind the moves in Lil Nas X’s history-making “Old Town Road” and also works regularly with Cardi B, Rihanna, Drake and the Jonas Brothers. Born in Toronto and now based in New York, Scott began her career as a featured dancer in music videos and eventually graduated to choreographer. “The journey has been filled with powerful moments,” she says. When she’s not coaching stars for their stage shows and tours, Scott can be found working with fashion brands—like Coach and Lacoste—on their commercials and making cameos in some of her clients’ music videos. She’s the dancer who appears at the end of Drake’s “Hotline Bling” sporting classic red lips (her go-to confidence booster). “Red is often associated with courage, and it’s said that when a woman puts on red lipstick, she feels invincible and unshakable,” says Scott. “Red lipstick definitely adds to my confidence. It’s my anthem.” —D’Loraine Miranda

From the video shoot to the @bet stage! @lilnasx & @billyraycyrus it was an absolute pleasure riding with y’all ?? Shout out @draico on the choreo collab!

Potential energy, as you may recall from middle-school science class, is the energy stored in an object because of its position relative to the objects around it. Some examples: a wrecking ball at its zenith, a drawn bowstring… and Colombian-Canadian singer-songwriter Jessie Reyez. For the past few years, she has been building energy by touring, working with big names like Calvin Harris and Dua Lipa, releasing two EPs and winning the 2018 Juno for Breakthrough Artist. And yet despite all that heat, it still feels like Reyez is on a launching pad with the countdown ticking away. Arguably, if you have been a face of Roots and count Elton John and Steven Tyler as fans, you’ve made it. But Reyez, who started out busking and playing open mics in Toronto’s Kensington Market, deserves to be much bigger than that. With her stripped-down, almost-Winehousian sound, not to mention her deeply personal lyrics that confront issues of racism, misogyny and inequality, the Toronto-based singer is perfectly suited for our present moment: She’s authentic, grounded, frighteningly hard-working…and a mass of potential. —Greg Hudson

Ladan Hussein is proof that a little danger isn’t the end of the world—or even the end of a career. Late last year, the singer-songwriter who used to release music under the stage name Cold Specks opened up about the psychotic break that led to her being diagnosed as schizophrenic. While it has become common for artists and public figures to talk about their struggles with depression, anxiety and/or addiction issues, having someone discuss a condition that most of us see as hopeless and scary feels groundbreaking and more than a little important. What’s even more significant, though, is the work Hussein is doing now. She would probably like to be known more for her music than for her medical history. Luckily, she’s back to making music, and now that her mind is clearer, it’s better than ever. —Greg Hudson

Anique Jordan is an interdisciplinary artist from Toronto whose work includes Evidence, a performance based on Clara Ford, a black woman who was accused of murdering a wealthy white man, and The Feast, which brought together 100 black women and gender-nonconforming artists around an exaggerated dinner table. Black history in Canada, working-class communities and the relationship between our country’s black and Indigenous peoples are among the themes in her work, which also includes sculpture and photography. She creates what she calls “impossible images,” reinterpreting the past in order to develop a new vision of the future.
“I don’t have any formal art education,” says Jordan. “When I was younger, I knew I didn’t want to work for anybody. I’ve always wanted to be able to do my own thing and to use the full capacity of my brain. What I knew was that I was creative and that I had questions that were urgent.” —Tatum Dooley

So excited to share my piece, Malvern, has been selected for the inaugural Black Art Fair held by @niacentre on October 19th. This is an art fair, directed by and presenting the work of Black Canadian artists. The first of its kind, as far as I know. If you've never considered purchasing artwork before or want to get a sense of the art scene in Toronto, come through and check it out. As artist who is also a collector, and as someone who has run a gallery and curated some of the most amazing Canadian artists, I can say that the importance of investing in original artwork can never be understated. Come thru y'all

Photography courtesy of Global TV
Get the best of FASHION in your inbox Thanks for signing up!
The latest fashion, beauty and celeb news delivered right to your email #FASHIONforall Now, check your inbox to complete your subscription
We won’t ever use your email address for anything else
Want even more FASHION? Follow us on social media.