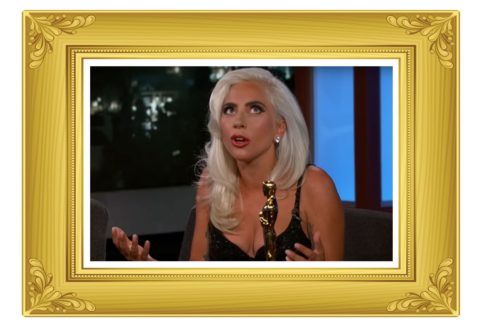 There’s a very specific formula to talk shows: ask a few questions, sets up a pre-arranged anecdote, roll a promotional clip. There are, of course, a few twists that have been introduced in recent years to add some excitement—and encourage a viral video. If you’re sitting down with Ellen, there’s a chance a clown will pop out to scare you; if you’re making an appearance on Jimmy Fallon, you may be asked to participate in a lip sync battle; if you’re dropping by James Corden, you could end up eating a calf’s brain. The onus to create an amusing talk show bit falls heavily on the celebrity guest, and every once in a while, an unexpected A-lister gifts the world a moment of spontaneous, hilarious and endearing entertainment. With the Talk Show Guest Hall of Fame, we commemorate these celebs.

Since the day Bradley Cooper and Lady Gaga stepped out together at the Venice Film Festival, holding hands down the red carpet into the premiere of A Star is Born, their off-screen relationship has been an object of constant speculation. Millions of fans took in their on-screen chemistry as they watched the film in theatres, listened to them gush over one another in press interviews and watched as the co-stars continued to longingly gaze into one another’s eyes on red carpets around the world.

The past six months of award season campaigning led to the ultimate apex of the Gooper lovefest: a live performance of “Shallow” on-stage at the 2019 Oscars with Cooper’s girlfriend, model Irina Shayk, looking on from the front row. The viral moment had everyone from Cooper’s ex-wife to Gaga’s ex-boyfriend to Scary Spice weighing in on whether or not the A Star is Born stars are, in fact, “f*cking.” (Those are David Spade’s words, not my own.)

Gaga herself has now spoken in response to the romance rumours. Or rather, eye rolled in response. On Wednesday night, the Oscar-winner appeared on Jimmy Kimmel Live, where Kimmel asked about her steamy connection with Cooper. “First of all, social media, quite frankly, is the toilet of the internet,” she said in response. Ain’t that true. “And what it has done to pop culture is abysmal. And people saw love, and guess what, that’s what we wanted you to see.”

“I’m an artist and I guess [Bradley and I] did a good job,” she added. “Fooled ya!” I guess that’s just show business, baby.