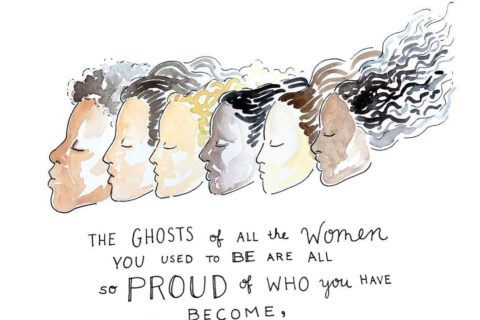 How Instapoetry is Changing the Way We Read Look at Poems

“Instapoetry is so accessible and consumable. It just opens the door and gives people permission to explore writing.”

Rupi Kaur is the pop star of poetry. She has 1.9 million followers on Instagram. Her first poetry collection, Milk and Honey, sold more than a million copies and reached number one on The New York Times Best Sellers list. Tickets for her readings sell out faster than Katy Perry concerts (although, to be fair, they do play at different venues). And like the greatest pop stars, Kaur has sparked a movement.

The 25-year-old Indian-born poet, who was raised in Brampton, Ont., first made a name for herself on the unlikely platform of Tumblr and then on Instagram, where she continues to post short confessional poems exploring feminism, sexual violence, heartbreak and resilience. In October, Kaur released her second collection of poetry, The Sun and Her Flowers.

Kaur is the leader of a new wave of young poets who are bypassing the literary gatekeepers―the editors, agents and publishers―and instead finding fame and followers via social media (although the book deals and multi-city readings will eventually follow). Dubbed “Instapoets,” these millennial wordsmiths and their millennial audiences are changing the face of poetry―critics be damned.

One of these poets is the mononymous Atticus. A 20-something originally from British Columbia and now living primarily in California, he has more than half a million followers on Instagram. At readings and in selfies, he wears a Guy Fawkes mask to conceal his identity. His poetry is concise and eschews lofty metaphors, instead including plain-spoken statements about love. One of his most popular verses, “love her, but leave her wild,” has become a favourite tattoo among his followers.

On social media, Atticus receives hundreds of messages a day from his fans, which he says are 60 per cent women, mostly millennials. People tell him that his poetry helped them in their struggles with depression and self-injury, and aspiring writers thank him for inspiring them to share their own poetry. “Instapoetry is so accessible and consumable,” says Atticus. “It just opens the door and gives people permission to explore writing.”

Indeed, social media has offered a home to Nikita Gill’s confessional prose about female empowerment. The 30-year-old Indian-British poet (Instagram followers: 275,000) started publishing her work online after receiving some 100 rejections from traditional publishers. “The main criticism I got is that my writing didn’t leave a lot to interpretation,” says Gill. “If you read literary journals right now, a lot of them publish work that’s quite abstract. It felt like there was no place for the kind of writing I was putting out there, which was more direct.”

A poem from Wild Embers! Photo credit goes to the lovely rach-renee.tumblr.com, thank you so much! Wild Embers is available worldwide if you would like to buy it! Please go to the link in my bio! #nikitagill #wildembers #sorcery #poetry #poem

Instapoems tend to be short enough to fit neatly into a single Instagram photo (often in pseudo-typewriter font) and simple enough that readers can instantly grasp the meaning while scrolling on their iPhones. They are a shot of vulnerability among all the curated snapshots of friends and influencers. Yes, Instapoetry may lack the subtlety and complexity that literary-minded poets and highbrow critics usually prefer, but its deeply confessional, heart-on-your-sleeve ethos is resonating with fans. As Gill says, she writes her poetry like she’s writing to her best friend.

The straightforward nature of Instapoetry is what makes writers like Kaur popular. Ian Williams, an award-winning poet and assistant poetry professor at The University of British Columbia, explains: “For a long time, poems have been so difficult and rarefied, and along comes Rupi Kaur, who is the age of her audience and seems to be flouting convention. Her readers can understand what she’s talking about. They don’t feel insulted or stupid, and they don’t feel like they need to dissect [the writing] like in English class.” And that mixture of social media celebrity and simple beauty reaches an audience that literary poetry can’t―or won’t. It breeds devotion.

Of course, the quality of Instapoetry varies, and the most powerful poems are those that move beyond what could be seen as inspirational quotes and instead speak to experiences that are rarely talked about in public. For Kaur, that means writing about menstruation, body image, rape or the immigrant experience, all the while invigorating her young female fans, who appreciate her honesty and vulnerability.

And like everything on Instagram, Instapoetry encourages mimicry. But maybe that’s not a bad thing. “I believe [writing poetry] has always been quite popular―but maybe not fashionable,” says Williams. “I think there are a lot of people who are in the closet writing poetry. These Instapoets…all they did was instead of writing in a notebook and tucking it under their bed, they wrote it on a computer and hit ‘post.’” Lucky for them, what they wrote—and then posted—was actually good.