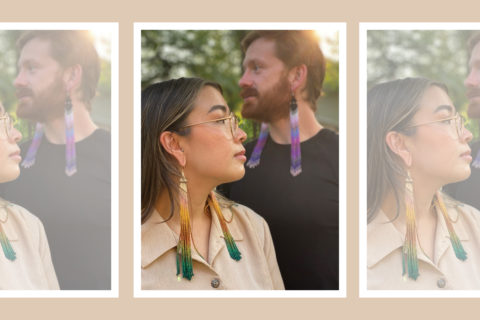 By David A. Robertson

Long before fast-fashion brands had resale platforms and luxury labels were using recycled leather, Indigenous artisans were cultivating a community of makers who responsibly harvested the land and made unique and meaningful designs in the process. Our clothing was made for survival, using resources that protected us from the elements while simultaneously celebrating our heritage. And we rejected the 20th-century throwaway culture of more mainstream makers, who, as Metis designer Justine Woods says, adopted the ethos of “How can I make this garment the quickest while paying the littlest?”

But the Western world is slowly catching up, and Indigenous creators are (finally!) being recognized in the process. Canada’s first Indigenous Governor General, Mary Simon, wore a dress by Inuit designer Victoria Okpik with beadwork by artist Julie Grenier from Kuujjuaq to her installation ceremony. Warren Steven Scott — from the Nlaka’pamux Nation in British Columbia — blew up on social media during the pandemic for his colourful earrings. And Jessie Pruden, a Metis beader from Manitoba, is now working with New York City fashion retailer Flying Solo for Paris Fashion Week.

Despite this recent rise in popularity, these Indigenous designers’ practices, techniques and traditions remain rooted in history and connect their clothing to both the future and the past. Here are a few sustainable Indigenous practices to consider working into your own fashion footprint.

Sustainable fashion practices by Indigenous designers aren’t only about who is making the clothing; they’re about where the material for clothing comes from. Haida/Cree designer Erin Brillon speaks of the traditional economy, where Indigenous people traded with those who were geographically closest first. Sourcing local cuts back on shipping and emissions, Metis artist Wenzdae Anaïs Dimaline explains, supporting community economic resurgence. Her shop, Culture Coven, opened in March 2022, works with brands by people of colour and the LGBTQIA2S+ community. Woods says it’s a “gift economy” because it relies on a broad participation of people who give and receive based on their abilities and needs. Payment is not exclusive to monetary funds; rather, it’s open to the exchange of gifts or services. It encourages shoppers to consider alternatives to buying new things and throwing away old ones while simultaneously building a strong community

My father grew up on the land. He told me that time works differently for Indigenous people. There was never a need to rush; it was about patience and following the patterns of the animals: taking what you needed, not what you wanted, to preserve the land and its resources. Metis designer Anne Mulaire Dandeneau’s intention, shared by every Indigenous artist in the industry I spoke with, is to take care of the planet you’re walking on. This was the original form of slow fashion — one that focuses on the entire process. The art and practice of beading is another good example; you’re forced to slow down and take a breath.

In the late 1800s, bison were almost extinct. The animals once relied upon by Indigenous people for subsistence were over-hunted by settlers because parts of their bodies were valuable. In stark contrast, Indigenous people used every part of the bison, leaving nothing to waste. This practice continues to be prioritized by Indigenous designers working today. Remnants from different seasons are repurposed. Victoria Kakuktinniq takes the offcuts of furs, skins and other materials and uses them for accessories like gloves, headbands, hats and purses. Just like in the 19th century, 100 per cent of the animal is used and trapping and harvesting are done ethically.

Lesley Hampton, an Anishinaabe designer from Temagami First Nation, says that a piece of clothing should be “an intimate and personal choice” that, like a story, is passed down from one generation to another. Rather than being tossed away, the item — and its intention, meaning and craftsmanship—is a source of pride and honour. For example, the ribbon skirt is a symbol of resilience and survival; traditionally, the fringes of the skirt would touch the earth and its medicines. Elder Myra Laramee says that in this way, “Mother Earth would always know who was making their presence felt on her back.” Fashion as lineage transcends trends, and as a result, regalia is repeatedly worn for years. Haudenosaunee designer Niio Perkins points out that Caroline Parker, a Seneca beader, wore a cotton dress and a beaded skirt in the mid-19th century that are still around today. Talk about sustainability.

Beaded earrings by Jessie Pruden. Photography by MAIN BY MOLLY PRATT. Graphic by Leo Tapel
Get the best of FASHION in your inbox Thanks for signing up!
The latest fashion, beauty and celeb news delivered right to your email #FASHIONforall Now, check your inbox to complete your subscription
We won’t ever use your email address for anything else
Want even more FASHION? Follow us on social media.