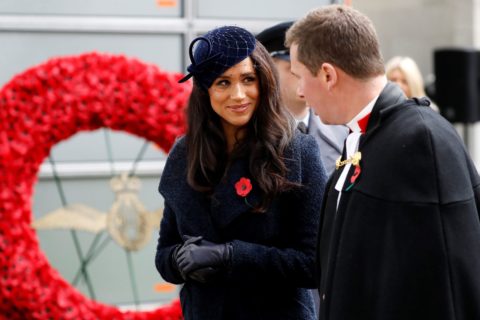 The former Secretary of State described the treatment of the Duchess as "heartbreaking".

Hillary Clinton has once again spoken out in defence of the Duchess of Sussex.

The former US presidential candidate appeared on BBC Radio 5 Live overnight, describing the treatment of Meghan in the press as “heartbreaking.”

“I think even if you go back and look at social media from the time the engagement was announced, race was clearly an element in it. And to think that some of your – what we would call mainstream – media actually allowed that to be printed in their pages, or amplified, was heartbreaking and wrong,” Clinton said of the reporting on Markle.

Plus, she says that the narrative around Meghan and Harry’s love story was largely ignored in favour of more hurtful coverage. “She has made her own way in the world. And then she falls in love, and he falls in love with her, and everybody should be celebrating that because it is a true love story. You can just look at them and see that.”

Clinton added that she would like to be able to comfort Meghan – something the Duchess would probably appreciate following the revelation in the recent royal documentary that not many people have asked if she’s OK. “I feel as a mother I just want to put my arms around her. Oh my God, I want to hug her! I want to tell her to hang in there, don’t let those bad guys get you down. Keep going, do what you think is right,” said Clinton before adding in some more words of advice. “You know, it’s not easy. And there are some techniques that can be learned along the way, some humour, some deflection, whatever, which I’m sure she will come to. But it is tough what she is going through. And I think she deserves a lot better.”

This is the second time Clinton has voiced her support for the Duchess. Back in October, as part of an interview with The Sunday Times, she said, “I do want to say that the way she’s been treated is inexplicable. I think if the explanation is that she’s biracial, then shame on everybody,” adding that she’s “a huge Meghan Markle fan.”

Photo by TOLGA AKMEN/AFP via Getty Images
Get the best of FASHION in your inbox Thanks for signing up!
The latest fashion, beauty and celeb news delivered right to your email #FASHIONforall Now, check your inbox to complete your subscription
We won’t ever use your email address for anything else
Want even more FASHION? Follow us on social media.