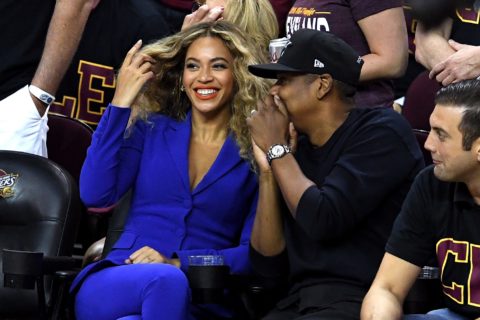 The Beyhive Thinks Beyoncé is Currently in Labour

If you’ve been wondering if Beyoncé actually has given birth to her twins, you’re not alone. After all, Amal and George Clooney already had their babies and Bey’s supposed due date has been under speculation since she gloriously announced her pregnancy on Instagram. Add in the last-minute cancellation of her Coachella performance and the Internet has been swarming with the idea that she is due around May or June. Now that June has arrived and Queen Bey has been laying low on social media, we (and the Beyhive) can’t help but wonder if she’s had her babies.

According to The Shade Room, a source (read: die-hard fan) reports that her “homegirl,” who works at the UCLA hospital, spotted the soon-to-be mother-of-three and her team arriving at the LA-based hospital and currently in the process of shutting down one whole floor, while moving current patients to another building. Oh, only Queen Bey. If that’s not convincing enough, the fan (a.ka. HeyQueen) pointed out Beyoncé’s hairstylist Chuck Amos recently posted a cute photo of the two with a heartwarming caption that says, “Hang in there, Mama! ? You @Beyonce!!” Could this be an encouraging message for Beyoncé who’s going into labour? We think so.

We also have our own speculations. Judging from her last Instagram photo in honour of Memorial Day, we think it’s highly possible.

Here’s why: If you’ve been paying close attention (read: you’re a true Bey fan), you might notice how much smaller her belly looks in the above photo compared to the Insta shots from her and Jay-Z’s OTT push party back on May 21. But, this could also be a throwback photo to throw us all off. (We wouldn’t be surprised, tbh.)

And judging from by tweets from the Beyhive, they, too, believe the twins have already arrived.

Beyonce is in labor, my uterus can feel it I swear she's releasing the twins

Nurse: Hey doctor we need you to come in, Beyoncé is in labor

DON'T LET THESE TRASH FINALS DISTRACT YOU FROM THE FACT THAT BEYONCÉ MAY BE IN LABOR RIGHT NOW #BeyHiveSupportsBeyonce pic.twitter.com/au85XjDJAO

Beyoncé is in labor.
the twins are on their way. pic.twitter.com/mmLUfGeKaH

Knowing how much Beyoncé loves to spring good news on us, you can bet we’ll be keeping our eyes on her Instagram account in the coming weeks. If she has already given birth to her twins, Beyoncé is probably orchestrating the perfect photoshoot for her babies right this second.