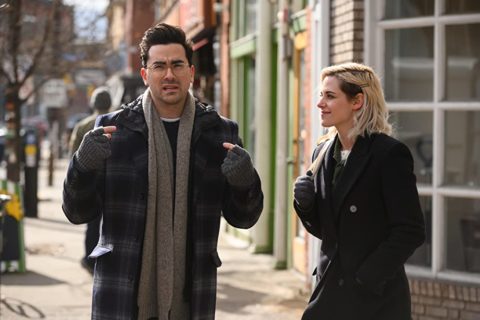 We finally got a look at the trailer for Happiest Season, starring Kristen Stewart, Mackenzie Davis and Dan Levy.

From the Happiest Season trailer release to a rap battle between Simu Liu and Ryan Reynolds, here’s everything that made headlines this week.

The trailer for Happiest Season dropped
The trailer for the highly anticipated queer rom-com starring Kristen Stewart and Mackenzie Davis finally dropped, and it looks just as delightful as one might hope. The two actresses play a couple whose lives are about to get complicated when they visit Davis’s family for Christmas. Dan Levy co-stars as Stewart’s best friend, and the cast is rounded out with a list of impressive names including Victor Garber, Mary Steenburgen, Aubrey Plaza and Alison Brie. The movie also features original music by Canadian duo Tegan and Sara, Bebe Rexha, Sia and others.

THE TRAILER FOR HAPPIEST SEASON IS FINALLY OUT! Our song Make You Mine This Season – a song we wrote JUST for the movie – is in the trailer!!! We’re SO EXCITED! GO WATCH! pic.twitter.com/0aTHhe7jPW

Simu Liu roasted Ryan Reynolds in a “diss track”
As members of the Marvel Cinematic Universe (Simu Liu as Shang-Chi and Ryan Reynolds as Wade Wilson/Deadpool), the Canadian actors aren’t technically rivals but Liu shared a “diss track” roasting Reynolds for a minute straight on his social media earlier this week. “Better call Tim Hortons because this roast just got DARK,” he posted online. The rap is part of AGBO Superhero League, a charity fantasy football league involving the stars of various Marvel movies and series, with the winner getting a million dollars for a charity of their choice. Now in week nine of the competition, Liu and Reynolds are battling for first place, with Liu playing for UNICEF Canada and Reynolds for SickKids Foundation. Watch this space for Reynolds’ rap comeback.

In this year’s @AGBOleague, we’re playing fantasy football for a million dollars towards the charity of our choice.

So you know I’m not gonna hold back on the trash talk.

Better call Tim Hortons @VancityReynolds, cuz this roast… is about to get DARK. pic.twitter.com/UaYnNhQlCK

Blue Ivy Carter narrated an audiobook
Blue Ivy Carter, offspring of Beyonce and Jay-Z, is only eight years old but she’s already the narrator of an audiobook based on an Oscar-winning film. Titled Hair Love, the audiobook adaptation of the 2019 animated short is now available via Audible, Google Play, Overdrive and more, and the award-winning seven-minute film itself is available to watch in full on YouTube.

Halsey released a book of poetry
Grammy-nominated musician Halsey released her debut book of poems this past week. Titled I Would Leave Me If I Could, the collection “delves into the highs and lows of doomed relationships, family ties, sexuality, and mental illness.” Halsey’s book comes on the heels of poetry collections released by Lili Reinhart and Lana Del Rey earlier this year.

Here is the table of contents for my book. It comes out tomorrow. I sincerely hope you love it. It’s my favorite thing I’ve ever made. https://t.co/HqIrJJ8joM pic.twitter.com/apXAxr95H2

And ICYMI: it was announced that The Weeknd will be headlining the Super Bowl Halftime Show next year.

image courtesy hulu
Get the best of FASHION in your inbox Thanks for signing up!
The latest fashion, beauty and celeb news delivered right to your email #FASHIONforall Now, check your inbox to complete your subscription
We won’t ever use your email address for anything else
Want even more FASHION? Follow us on social media.