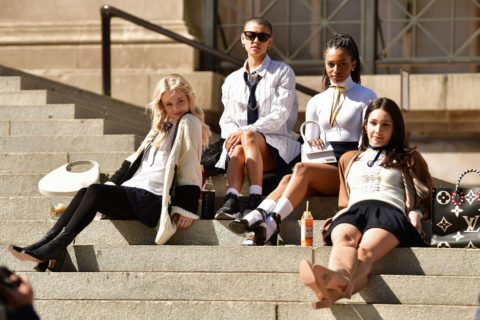 Everything You Need to Know About the Gossip Girl Reboot

Hello Upper East Siders, your favourite vindictive queen is back.

Get ready for some binge-worthy drama from the next generation of New York private school teens because the Gossip Girl reboot is officially here. The revival of the iconic television show premieres July 8, which means a new Serena Van Der Woodsen to gawk at, (hopefully) a Blair Waldorf and Chuck Bass duo to swoon over and perhaps even a new “Lonely Boy.”

The Gossip Girl reboot was created and written by Joshua Safran, who was the executive producer in the original CW show. Like the OG series, it will be based on the book by Cecily von Ziegesar.

“Nearly a decade after the original Gossip Girl’s website went dark, a new generation of Upper East Side private school teens are introduced to the unforgiving and transformative reality of nonstop social surveillance,” reads the synopsis on HBO max. “Diving back into the scandalous lives of Manhattan’s elite, this extension of the pop culture classic explores just how much social media — and the landscape of New York City itself — has evolved since we last dished on the Met steps.”

We rounded up all the must-know details about new series, so you can be better prepared for the long-awaited, juicy text from our favourite vindictive drama queen. (XOXO)

Fans were excited to hear (literally) Kristen Bell as the voice of GG once again. Though the reboot will focus on a whole new cast, Safran said in an interview with Entertainment Tonight that an appearance from the OG Upper East Siders isn’t out of the question. “I would love for everyone to come back if they wanted to. The universe still exists. The characters talk about Serena, Blair, Chuck, Dan,” he said.

Though it’s unsure who might be the next Queen B, it’s time to meet the new diverse cast.

Canadian actress and singer Jordan Alexander is playing Julien Calloway, a teen influencer. The Unbury the Biscuit and Sacred Lies star “brings the drama with the fashion,” and is ready to serve looks in the new series. “I always try to channel any intimidation I might feel into energy that empowers me rather than makes me cower,” FASHION’s May 2021 cover star told us.

Savannah Smith makes her on-screen debut as Monet de Haan. “It’s already a dream to be able to be a part of this project, but on top of that I get to be a part of a greater responsibility that I feel as a Black, bisexual woman in the media,” she told Wonderland Magazine.

Model and skater Evan Mock is also making his first appearance on screen. The 21-year-old, born in Hawaii, plays Akeno “Aki” Menzies. In an interview with Vanity Fair, Mock describes the new series as “woke,” “blunt,” and “graphic.”

Actress and musician Emily Alyn Lind, 19, plays Audrey Hope, the daughter of an athleisure designer (sound familiar?). In the Gossip Girl teaser trailer, Lind is seen kissing necks with Mock. In an interview with Harper’s Bazaar, she said her character is “very into classic, old-fashion type things…into the finer things in life…[but] beginning to wonder what more could be out there.” (Oh, B.)

Uganda-born Whitney Peak plays Zoya Lott, who exhibits Dan Humphrey traits, according to Cosmopolitan. The 17-year-old actress has played numerous roles prior to being cast on Gossip Girl, like Judith Blackwood in Netflix’s Chilling Adventures of Sabrina and smaller roles in the films Molly’s Game and iZombie.

Scottish actor and singer Thomas Doherty plays Max Wolfe. Some have speculated he will be the reboot’s heartthrob, but as a polyamorous pansexual. “Yes, I do get naked, and yes, I do indulge,” he told Cosmopolitan.

Rookie founder Tavi Gevinson is also in the series. She will be playing Kate Keller, a character who embodies “ambition.” In an interview with Teen Vogue, Gevinson noted that the original show, if it were to air today, would probably get a lot of pushback and be considered even more controversial than when it first aired. “I think that it’s a good time to [reimagine it],” she said. “This cast and the storylines are much more inclusive. Obviously, it’s still a school and that world, and there’s still a lot of wealth. I think this reimagining takes its own characters to task for how they choose to wield the power they have.”

Mexican-American actress Zión Moreno is playing stylist Luna La. As a transgender woman, Moreno previously told Netflix that she was bullied at school for being seen as “weird.” She added that she knew her identity didn’t match the body she saw in the mirror and received tremendous support from her family when she decided to transition.

No slut shaming. No catfights. Those are not things I believe need to be in this show for it to be fun. Or any show? GG2 is sex positive and our characters use their brains, not their brawn, to take you out!

Even though some of these characters sound eerily familiar, Safran tweeted in May that the Gossip Girl reboot will not partake in some of the more problematic tropes from the original series. “No slut shaming. No catfights. Those are not things I believe need to be in the show for it to be fun,” Safran said. “Or any show? GG2 is sex positive and out characters use their brains, not their brawn, to take you out!” We love to hear it, but some people have said that hopefully, this doesn’t erase issues that still do exist.

When showrunners don’t understand how to actually be progressive 🙃 Show how to tackle these issues, not erase them. They still exist IRL! https://t.co/CCxvMtRzHq

Where can I watch the Gossip Girl reboot trailer?

The teaser trailer for the 2021 show dropped at the end of May. You can watch the teaser on HBO Max’s YouTube Channel. In early June, a longer look at the series hit the official Twitter page.

Your patience shall be rewarded my dear followers, and this is quite the prize. Don’t say I’ve never done anything for you. XOXO. pic.twitter.com/sjD9sG8Rbp

Where can I watch Gossip Girl reboot?

The Gossip Girl reboot premieres on July 8 on HBO max. According to Deadline, HBO has ordered 10 hour-long episodes of the new version of GG and new episodes will be released on Thursdays. An HBO Max subscription is $14.99 a month for ad-free viewing, or $9.99 a month with commercials. For easy viewing in Canada, Crave also includes a HBO bundle which can be added on to your subscription for $9.99.