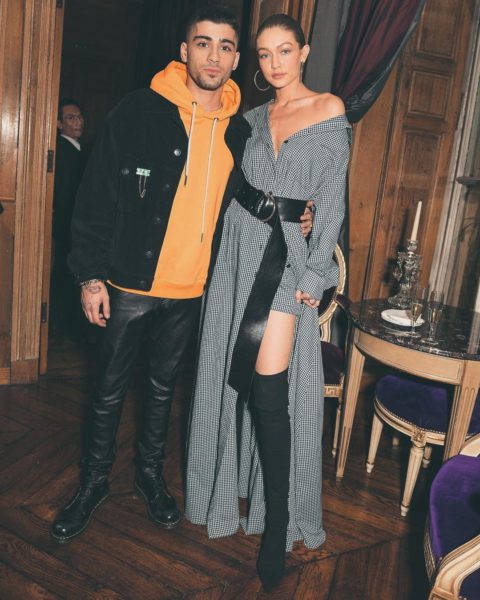 Whether sitting pretty in the front row together, being spotted snapping adorable selfies with each other, or sticking up for one another on social media, there’s no denying that Gigi Hadid and Zayn Malik are one of the world’s most aspirational couples of the moment.

Their latest move? The Versus Versace Spring 2017 campaign. Shot by Hadid herself, the series of images feature Malik and model Adwoa Aboah donning the Italian label’s duds.

The Versus campaign presents two extraordinary people, captured by an extraordinary woman and a natural photographic talent. #VersusUncensored

This gig should come as no surprise though: The couple sat front row at the brand’s Spring 2017 show last September, and have also collaborated on projects such the ex-Directioner’s “Pillow Talk” music video and their adorable Mario Testino-lensed shoot for Vogue.

❤️ @voguemagazine by @mariotestino on stands in May!! xx

Clearly when it comes to work the couple aren’t afraid to mix business with pleasure.

The Versus Versace Spring 2017 campaign also includes a series of  “raw and spontaneous,”  videos of the singer being interviewed by Hadid.

Q & A with Zayn Malik on the #VersusSS17 campaign. #VersusUncensored

In one clip, Malik shares what he does during his personal time: “When I’m in a good mood, I might do a bit of cooking…play a little video games.”

In another video she asks him who he enjoys hanging out with when he’s alone, to which he answers “you,” obviously.

To all the Hollywood couples out there: You’ve got nothing on Gigi and Zayn! Sorry, but it’s true.

Photography by Instagram/gigihadid
Get the best of FASHION in your inbox Thanks for signing up!
The latest fashion, beauty and celeb news delivered right to your email #FASHIONforall Now, check your inbox to complete your subscription
We won’t ever use your email address for anything else
Want even more FASHION? Follow us on social media.