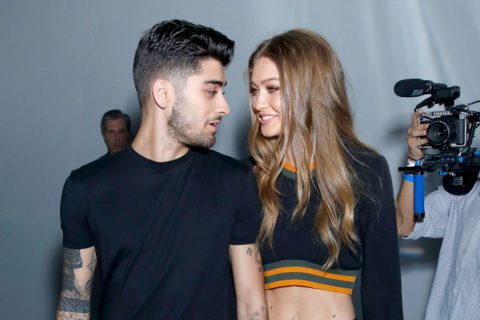 We don’t know if Gigi Hadid is the luckiest or the unluckiest girl today.

In a recent Snapchat video courtesy of sister Bella Hadid, Gigi is seen picking up a small sculpture (or cookie?) of a buddha’s face and doing her, erm, best impersonation of it at a friend’s birthday party. Not cool.

this is y'all woke palestine queen? Gigi out here mocking Asian people. i would say she's cancelled but she never started. rat @GiGiHadid pic.twitter.com/b6wj5k1sXE

Given that her boyfriend Zayn Malik is half-Pakistani, Twitter trolls were quick to point it out and had plenty to say regarding the model’s recent ignorant actions.

@GiGiHadid it's not funny to mock asian features please be educated

"Gigi Hadid is being racist again."
Me: pic.twitter.com/b5o2xlCFIN

gigi hadid did a blackface photoshoot, made fun of asians, &thought zayn malik was middle eastern bc of his facial features..& yall like her

Though the Hadid sisters may have seen it as harmless at the time, Bella has since deleted the story from her account, proving it may not have been their proudest moment to date. As for Zayn? Per devoted boyfriend duties, the singer cheekily responded to a Twitter user when asked how he felt about his girlfriend making fun of people of Asian descent.

@KristopherRod trust me.. she likes asians ;) ??

Obviously, people had to something to say about his tweet.

Funny how @GiGiHadid was silent when @zaynmalik was getting dragged for his race/religion but now "he" has no problem defending her racism.

@zaynmalik you seriously need to educate yourself for the sake of your career and your social standing. You can't get away with this shit

@zaynmalik come on man, you're better than that. just bc she's your girlfriend doesn't mean you have to condone her ignorance & disrespect

@zaynmalik you mean the asian that you classify under? not the fans that have the features that your girlfriend mocked?

Clearly, Zayn is not worried and Gigi proved it with a photo on her IG story.

Photography by Darren Gerrish/WireImage
Get the best of FASHION in your inbox Thanks for signing up!
The latest fashion, beauty and celeb news delivered right to your email #FASHIONforall Now, check your inbox to complete your subscription
We won’t ever use your email address for anything else
Want even more FASHION? Follow us on social media.