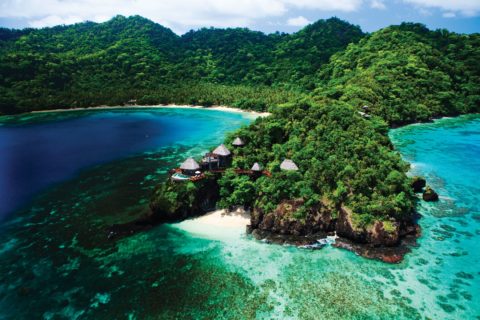 Laucala is One of the Most Exclusive (and Instagram-worthy) Destinations

The whole island—excluding the owner's private quarters—can be rented for $200,000 a night with a five-night minimum stay, as Elle MacPherson reportedly did in 2013 when she married billionaire Jeffrey Soffer.

As much as I like travelling to adventurous locations, TBH, I’m not one for adventure travel. So just because I’m staying on Laucala (pronounced “Lothala”) Island, 40 minutes from Fiji’s diving wonder, the Great White Wall, doesn’t mean I’ll take up diving. But on day three of my trip, I find myself holding hands with one of the island’s divemasters while snorkelling just 15 minutes from the remote island paradise in the South Pacific Ocean.

It’s been five years since I last snorkelled, and I’m waiting for my open-water courage to return when I tilt my head sideways and spy my guide’s portly tummy underwater, popping out from his too-tight wetsuit. It’s an amusing moment that gets me into the swim of things. There’s a skipper on our speedboat, too, so this 2:1 ratio is pretty good. But on Laucala, where there are 400 staff for a maximum of 72 guests, it’s actually kind of low.

In the water is where Laucala makes the most sense to me. There’s a bright blue starfish pressed up against a rocky surface, a baby shark swims into view and the curved walls of coral remind me of Nuku, my villa on the island. (It has no corners.) The jellyfish floating near me resemble the tendrilly chandelier in my room. I find out later that this light is actually called “Jellyfish Chandelier” and the “tentacles” are made from local magi magi (woven coconut husks) with hanging shells attached, floating like discs from the ceiling.

“A lot of our inspiration was taken from nature, and the island provides such natural beauty,” writes award-winning interior designer Lynne Hunt in her design notes for the island. “We sourced unusual and funky designs for furniture, such as driftwood lamps, root coffee tables, rain-tree vanities and coral-sand plaster walls, and if we were unable to source the right piece, we would draw it and have it made. A real luxury for any designer.”

This “luxury” makes Laucala Island at times baffling and hard to understand. It is, as Travel + Leisure’s Peter Jon Lindberg wrote in 2015, “a private island that might as well be a private alternate universe.” Laucala is Westworld without the violence and robots. Although, after you hear “bula,” the standard Fijian salutation (translation: “everything”), so often and with such sincerity, it’s hard to believe the locally trained employees are actually human.

It would be interesting to know just what Austrian billionaire Dietrich Mateschitz (of Red Bull energy drinks fame) had in mind when he bought this 1,416-hectare island in 2003 from the estate of Malcolm Forbes (whose ashes are buried here). Mateschitz began a painstaking five-year renovation that spared no expense. Literally. Local residents were moved to the neighbouring island while 25 villas were built. Plantation villas, like the one I’m staying in, start at $6,000 a night, while the 1,207-square-metre Hilltop Estate can be yours for $56,000 a night (provided Mateschitz grants his permission). Specialty accommodations, like the Overwater Villa ($11,000), jut out into the sea like rustic tree houses built for castaways—except you can arrive (and dock) at Overwater in your yacht. From the water, Laucala presents a rustic jungle feel, but up close it offers delights you might not have known you even wanted.

My villa has an infinity pool and lounge, where meals, drinks or massages can be had, and an electric cart. (I always find mine charged in the morning—even when I have forgotten to plug it in.) This is how everyone accesses the island’s five restaurants, fitness room and spa. It’s also how I reach the breathtaking outdoor glass infinity pool that’s now a social media sensation, thanks to visitors who post “belfies” (yep!) on Instagram. It’s handy that Laucala has impeccable Wi-Fi service despite being in the absolute middle of nowhere.

The solitude here is a reminder that Laucala is “not an occupancy-driven property,” as one staffer puts it. One day, I spy a young couple, presumably on their honeymoon, who are staying in the Overwater Villa; another morning, I see a multi-generational family having breakfast; and one night, during an eight-course dinner, I encounter an avid golfer (yes, the island has an 18-hole course) who has arrived solo after splitting from his wife.

During December—or “Festivus,” as they call it—Laucala is full, even with a minimum seven-day stay. At this all-inclusive, guests don’t have a check-in or check-out time and there is no providing your credit card upon arrival. Nearly everything within the reef is included, while the not-so-mini bar is restocked daily. “Feel free to pack light,” wrote one of my hosts in an email as she informed me that laundry is collected daily at turndown and returned to the villa’s dressing room the next day, folded neatly in a basket lined with tissue paper.

Though Laucala’s management won’t reveal any details about previous guests, the island’s relative isolation, amenities and private airport make it popular with celebrities and the very rich. For the less celebrated, a fleet of six-seater jets collect guests at Nadi, Fiji’s tourist hub, for the 45-minute flight to Laucala.

Back in the water, this time in a giant outdoor stone tub that is clearly meant for two people given how easily I can float around in it, I look out toward the open sea. It reminds me of my backpacker 20s, when I once slept in a hammock strung between two palm trees on a small beach in the Andaman Islands. It was beautiful but awful. I was lonelier then—and terrified of local dogs roaming around in search of food while I pretended to sleep. That’s definitely not a problem here.

Every night, the turndown team leaves a flower and a literary passage on the bedside table. The one from my last night, by Oscar Hammerstein II, stays with me: “If you don’t have a dream, how you gonna have a dream come true?” In this moment, on this island, it feels more like a riddle than a cautionary tale because I never dreamed I’d ever be here. And that must be what Laucala Island is all about.

Pack for the Laucala tropical vacation of your dreams below! 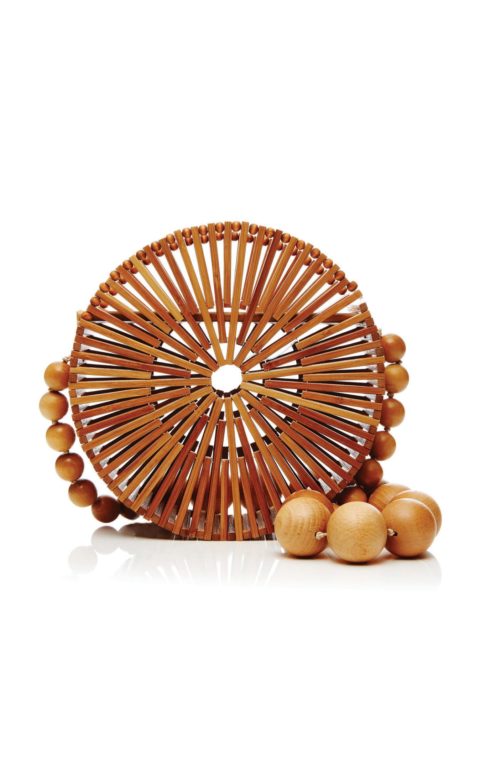 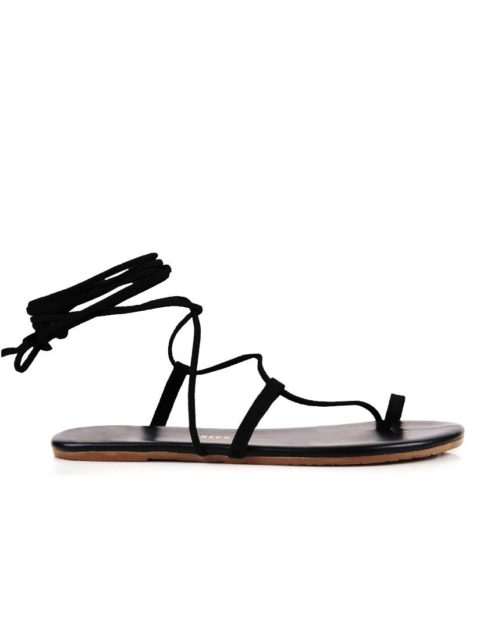 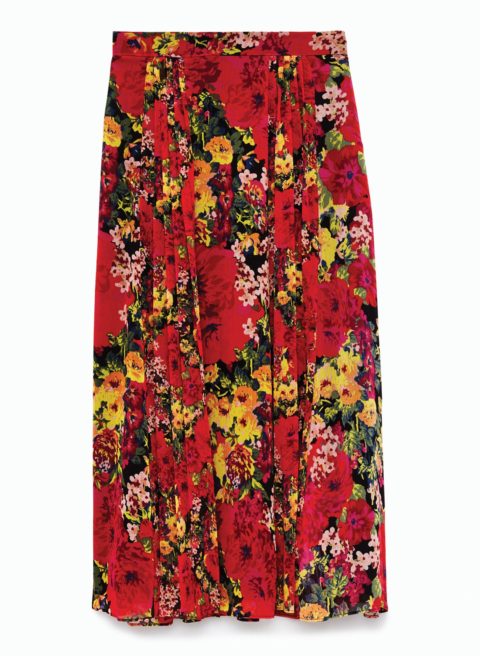 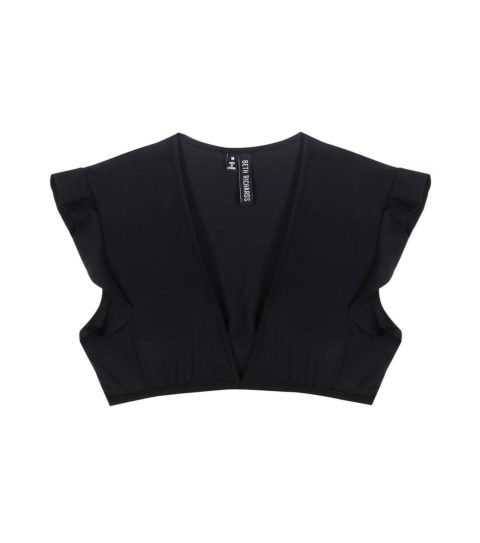