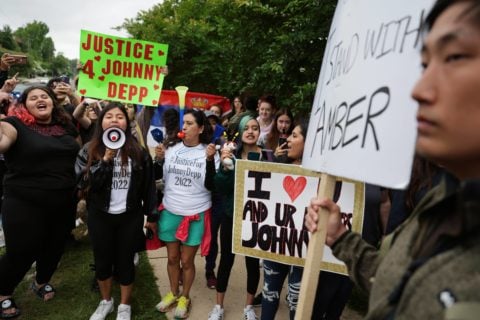 The defamation lawsuit between ex-spouses Johnny Depp and Amber Heard came to an end on June 1, but the fallout from this case has just begun. The jury found both parties to be guilty of defamation, and awarded Depp $15 million in damages and Heard $2 million. It was a victory for Johnny Depp, but some argue the verdict was a loss for abuse survivors everywhere.

To recap: The jury found Heard defamed Depp in a 2018 op-ed for The Washington Post, in which she did not actually name her ex-husband. The statements Depp claimed to be defamatory and false were: “I spoke up against sexual violence — and faced our culture’s wrath. That has to change”; “Two years ago, I became a public figure representing domestic abuse, and I felt the full force of our culture’s wrath for women who speak out”; and “I had the rare vantage point of seeing, in real time, how institutions protect men accused of abuse.” (Heard had previously accused Depp of domestic violence in 2016 when she filed for a temporary restraining order against him.)

It’s worth noting that, in 2020, Depp lost a libel case in which he sued the British tabloid The Sun for publishing an article that referred to him as a “wife beater.” That case was before a judge only, who found the paper’s claims of Depp’s alleged abuse against Heard to be “substantially true.”  In the U.S., his defamation suit against Heard unfolded quite differently.

For the grueling six-week-long trial that drudged up emails, text messages and covert audio recordings to shed light on the short-lived marriage, the jury was not sequestered. And outside the Fairfax County coutroom, Depp was winning the support of the public as the #JusticeforJohnnyDepp movement grew in numbers.

Those supporters believe the Depp v Heard ruling to be a victory for male survivors of abuse. Following the verdict, Depp posted a statement to Instagram: “From the very beginning, the goal of bringing this case was to reveal the truth, regardless of the outcome…I feel at peace knowing I have finally accomplished that.”

“It is hard to see how any abuse survivor, whatever their gender, would take comfort in this,” says Kim Hawkins, a Vancouver-based lawyer and executive director of Rise Women’s Legal Centre. “You have to remember this case wasn’t about providing support or protection to abuse survivors, it was about defamation…Depp wasn’t representing male abuse survivors as a group or fighting for their rights and recognition.”

In 2017, the #MeToo movement saw many people come forward and speak out about the abuse they faced in Hollywood, namely by powerful men. It was largely regarded as a cultural shift in the way we talk about and understand abuse. But five years later, the public spectacle surrounding this trial exposes how little progress has been made, says Winnipeg-based lawyer Paula Ethans. “This case shows us that #MeToo didn’t ‘go too far;’ #MeToo didn’t take us to where we as a society needed to go.”

For survivors of abuse, the trial may raise some red flags. For one, Ethans says the “entire lawsuit is an act of DARVO.” The acronym, standing for deny, attack, and reverse victim and offender, refers to when a person accused of abuse positions themselves as the victim.

“Heard said she was a survivor of abuse in a 2018 article — without even naming Depp — and his response was to deny; attack via lawsuit; and assume the role of victim by saying the harm done here was to his reputation,” she says.

The result of this tactic is victim blaming, which Hawkins says is already far too common in the legal system. “It’s not surprising that it happened, and it’s not new,” she explains. “But when a high-profile case like this plays out in the media, it helps to reinforce and normalize the strategy.”

The case has also reinforced the fallacy of a “perfect victim:” a survivor who is submissive, weak and unflawed. Heard was decidedly flawed. Her testimonies of alleged abuse became a meme, her body language was scrutinized and her mental illness diagnosis was used to further paint her as the villain.

It’s not a stretch to say that the ramifications of this case could be felt in Canada. Right now, according to a 2022  Canadian Women’s Foundation survey, 23 per cent of people say intimate partner violence is none of their business if it doesn’t directly involve them.

“Such open vitriolic reactions may very well discourage survivors from speaking out in their own lives,” says Andrea Gunraj, vice president of public engagement at the Canadian Women’s Foundation. “And it might make people feel free to publicly blame, shame, and disparage people who are victimized and to abuse them further for speaking out in the first place.”

It’s tough to predict where exactly this trial leaves victims of abuse, because, in the court of public opinion, Depp won long before the verdict was ever read. For Ethans, the case should remind us of the age-old warning for survivors: beware. “Beware of speaking out, beware of facing your abuser,” she explains. “You might be ostracized, hated, crucified.”

We all want a redemption story — good triumphing over evil. But abuse is more complicated than that. It exists in a grey area, and that nuance was lost as social media made a spectacle of the case. As much as we might want to make a winner out of Johnny Depp, in reality, we all lost.