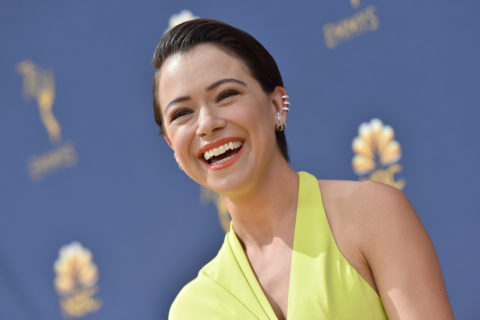 From Tatiana Maslany as She-Hulk in Marvel’s upcoming Disney+ series to Apple’s new content subscription plan, here’s all the news you missed this week.

Tatiana Maslany was announced as She-Hulk
Orphan Black star (and Saskatchewan native) Tatiana Maslany will be playing the lead role in Marvel’s upcoming She-Hulk series for Disney+. The last major character to be co-created by Stan Lee, She-Hulk’s human alter ego is Jennifer Walters, who gets her powers after an emergency blood transfusion from her cousin Bruce Banner (aka the Hulk). Stay tuned for more details.

Drew Barrymore launched a talk show
Drew Barrymore is back on our screens, this time as a talk show host. The first episode of The Drew Barrymore Show premiered September 14 on CBS with a Charlie’s Angels reunion. Cameron Diaz and Lucy Liu joined Barrymore to kick the show off, followed by guests like Reese Witherspoon, Gabrielle Union, Charlize Theron and Billy Porter over the course of the first week. In addition to interviews, Barrymore does a quirky daily news segment, monologues and more. “I am not one person, I am not one mood, I am not one thing, I am such a mixed bag myself,” she said during a virtual press conference. “I want a show that represents all of the different things that we are interested in.”

.@TheeBillyPorter breaks down his thoughts on masculinity.

Instagram launched new accessibility features
Instagram recently introduced AI-powered automatic video captions for IGTV to make it easier and more accessible for deaf and hard-of-hearing communities to use the platform’s video services. To start, the feature will be available in sixteen languages globally. According to Instagram, as more people use the closed captions in this new feature, the AI will begin to learn and improve in quality.

And ICYMI: we spoke to Noah Reid about his new short film, which premiered at TIFF this week, and the end of Schitt’s Creek.