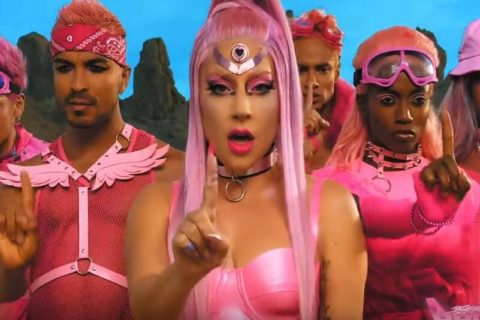 Lady Gaga released the video to her new single
Three weeks ago, Lady Gaga’s first single from her upcoming sixth album Chromatica was accidentally released online. Now, we’ve got a music video to go along with the track, titled “Stupid Love.” In typical Gaga fashion, there’s nothing subtle about the sci-fi-meets-pop video, which opens with her and a crew of backup dancers in head-to-toe pink futuristic outfits dancing in a desert. (Fun fact: the entire video is shot on an iPhone 11 Pro.) As for the album itself, Gaga told Apple Music’s Zane Lowe that she was “miserable, sad, depressed” and “cried constantly” through the process of making it. Yet, amidst the sadness there’s joy to be found. “We are definitely dancing,” she said.

Taylor Swift directed and produced her new music video
Gaga’s not the only pop star who debuted a new video this week. Taylor Swift dropped the video for her new single “The Man,” which calls out male executives in the music industry (in a nod to Scooter Braun, whom she’s been embroiled in a feud with for several months). With the help of prosthetics and a fake moustache, Swift transforms into a man-spreading, entitled music executive, and also speaks to how differently the world views successful men and women in the lyrics. The end credits note that the video was directed, produced, owned by and starring Swift.

Maria Sharapova announced her retirement
Tennis champion Maria Sharapova announced this week that she would be leaving the world of tennis for good. In an exclusive essay for Vanity Fair and Vogue, the former World No 1 tennis player asks: “How do you leave behind the only life you’ve ever known?” In the essay, she writes about how she got her start, the discipline it takes to be a tennis champion, the many injuries she suffered, and the nagging question of whether it was all worth it. “After 28 years and five Grand Slam titles, I’m ready to scale another mountain—to compete on a different type of terrain.”

Sofia Vergara was announced as the new judge of America’s Got Talent
With Modern Family coming to an end this year this year after 11 seasons, fans of the show will no doubt be heartbroken but the good news is that Sofia Vergara, one of the show’s stars, already has her next gig lined up. Vergara will be joining Terry Crews, Simon Cowell, Howie Mandell and Heidi Klum on the judging panel of America’s Got Talent. This news comes after two of the previous season’s judges, Gabrielle Union and Julianne Hough, departed the show amid controversy about a toxic culture on set. In a statement, Vergara said, “I’m so happy to join my new family on AGT. This is a new and exciting next chapter for me and I’m extremely proud to be the first Latin judge on the show. I can’t wait to watch all the talent and have fun with all you guys.”

Image via YouTube
Get the best of FASHION in your inbox Thanks for signing up!
The latest fashion, beauty and celeb news delivered right to your email #FASHIONforall Now, check your inbox to complete your subscription
We won’t ever use your email address for anything else
Want even more FASHION? Follow us on social media.