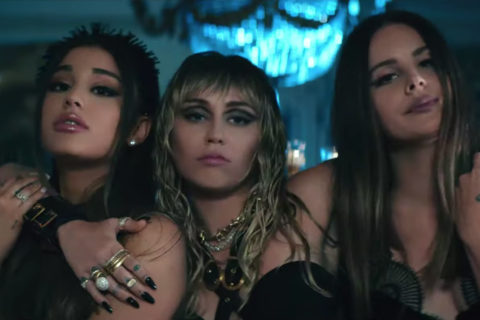 It follows a similar theme to Destiny's Child's 'Independent Women'

Remember back to the days of 2000, when Destiny’s Child’s Independent Women was on replay on your walkman and your walls were covered with kickass images of Cameron Diaz, Lucy Liu and Drew Barrymore as Charlie’s Angels? Now, some 19 years later, Charlie’s Angels is back with yet another reboot and another all-female led anthem to accompany it – the only difference? We’ll be blasting it through our iPhones.

Ariana Grande, Miley Cyrus and Lana Del Rey have teamed up on a new song called Don’t Call Me Angel and it’s catchy as hell. With lyrics like “I make my money and I write the cheques/so say my name with a little respect/all my girls successful/and your just our guest”, it’s hard not to be hooked.

Speaking of the song, Elizabeth Banks, the director of the 2019 version starring Kristen Stewart, Naomi Scott and Ella Balinska, said, “It was important to me to kick off Charlie’s Angels with a huge female-powered anthem driven by a big voice – but to get three of the biggest voices out there? It’s a dream come true. What Ariana, Miley and Lana have delivered surpasses even my high expectations. Their song is resonant and meaningful, and it kicks major ass.”

The song premiered just 10 hours ago and the clip already has over 7.5 million views on YouTube.

The new Charlie’s Angels is scheduled for release in November and there’s already plenty of hype around the film. Everyone’s boyfriend Noah Centineo has been confirmed to play a love interest, Star Wars’ Patrick Stewart has a key role and so does Sam Claflin from The Hunger Games.

In an earlier statement, Stewart said the film is “like a ‘woke’ version. There’s a kitsch nature to the last ones that was super fun. But nowadays, if you see a woman in combat, everything should be completely and utterly within their ability.”